Test drive Haval Dargo: watch out, big dog!..
35
0
(0 voices, on average: 0 out of 5)
Not many new cars coming to our market can be called expected. In recent years, mostly faceless crossovers or “state employees” have come to us, which are measured by the number of options and the terms of the factory warranty. However, we were waiting for this model. For once, it was decided to bring a car with a distinctive appearance to our conservative market, and not a classic remnant of a universal look, designed to please the widest possible audience of consumers. Haval Dargo knows exactly who it is for. But the main question of the test drive: is there something serious behind the brutal appearance?..

Obviously, the developers focused on the wow effect! Even if you are not a fan of brutality in automotive design, it is simply impossible not to note the originality of the Dargo. Of course, picky buyers will see borrowed elements from several iconic models in the crossover. Most striking is the similarity with the new Ford Bronco, but here the “Chinese” have nothing to show, because in their homeland Dargo, or Dagou (“big dog”), as it is called in China, appeared on the market a year earlier than the new generation of the legendary American SUV. In the exterior of the car, there is also a desire to be similar to both the Jeep Wrangler and the Toyota Land Cruiser 300, and the “Haval Dargo” nameplate on the trunk lid is a complete copy of the famous Land Rover badge. But all these nitpicks fade against the background of the image of the car as a whole, which, whatever one may say, came out original and charismatic. The exaggerated visual simplicity of the front LED optics, the aggressive radiator grille and the massive black bumper immediately give Dargo a “pretentious” car. Rounded shapes and “18th” wheels visually make the car larger than it actually is. Doubts are only caused by steel thresholds, which, by the very fact of their presence, make all attempts to perceive Haval Dargo as a real SUV ridiculous.

The same motifs can be traced in the interior of the crossover as in the exterior. Massive door handles and a passenger handrail screwed to the glove box, huge air vents with orange inserts and toggle switches on the center console – everything reminds us that we have in our hands not at all a faceless product for office clerks. It just turns out that for all the brutality of the Dargo image behind the wheel of this car, a gadget lover and a consumer of digital services adapt much faster than a stern fisher-hunter in rubber boots.

The fact is that the control of almost all the main functions is placed on a huge touch screen on the center console. And difficulties here await even experienced motorists. Yes, you can always make excuses that you don’t buy a car for one month or even a year or another week, you can get used to any organs and control algorithms. But even if so, answer yourself the question: how many actions do you consider normal to take to turn on the heated seats? Everyone has their own answer, but for some reason Haval decided that there should be four of them. Instead of the classic pressing the button in Dargo, to turn on the heating, you need to go to the control menu and carry out a number of manipulations. 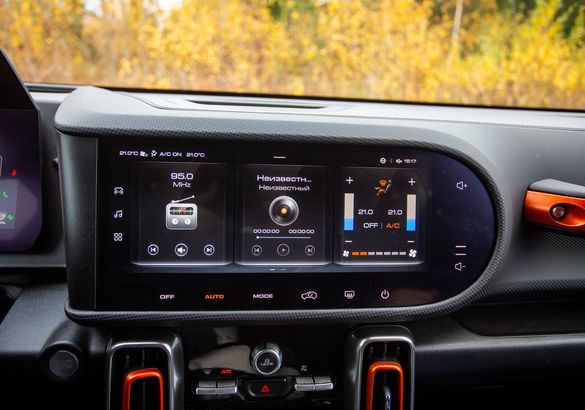 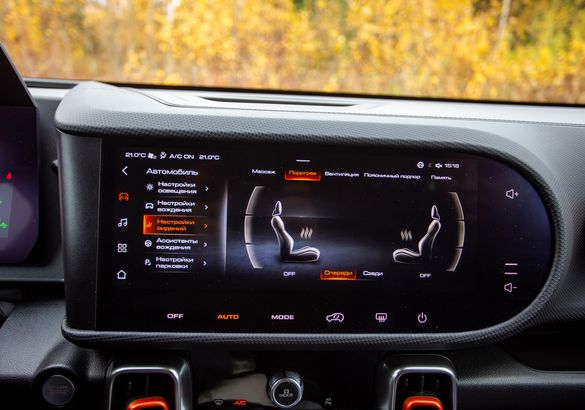 Approximately the same questions in the style of “Why?” can be set by looking at the dashboard. The visor above the display performs only one function: it shows which gear is currently engaged. There is no other use for it, and if its task is to reduce glare on the screen, then we can say with confidence that it does its job poorly. 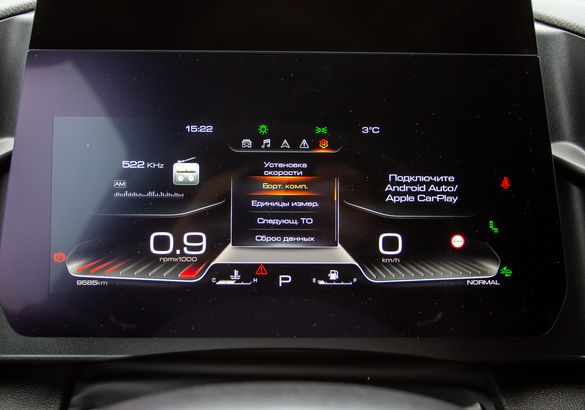 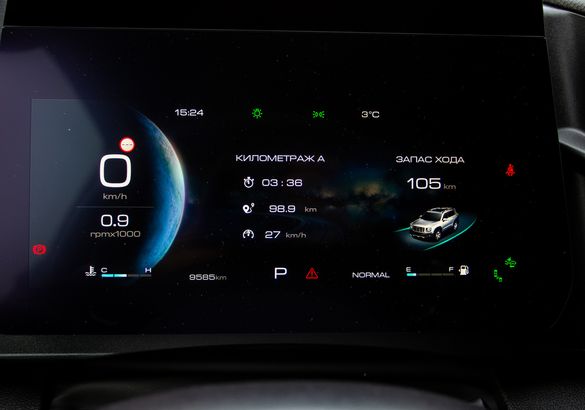 A fully digital instrument panel raises one main question: why, with the presence of such wide personalization options in almost everything (for example, a whole scattering of driving modes), there are only two visual design options? And where is the option with the usual “wells”? ..
The icing on the cake is the “twist” for switching driving modes, located in the place where for centuries, since the time when the first car audio system was invented, there was a volume control. Naturally, the first few days you reflexively switch the driving mode instead of the radio volume. Of course, you can always say that while owning a car you get used to it a million times, but why change those algorithms that have worked effectively for decades? To publicly declare that I’m not like everyone else? But then you need to be “not like that” to the end, and it is with this that Haval Dargo sometimes has problems. 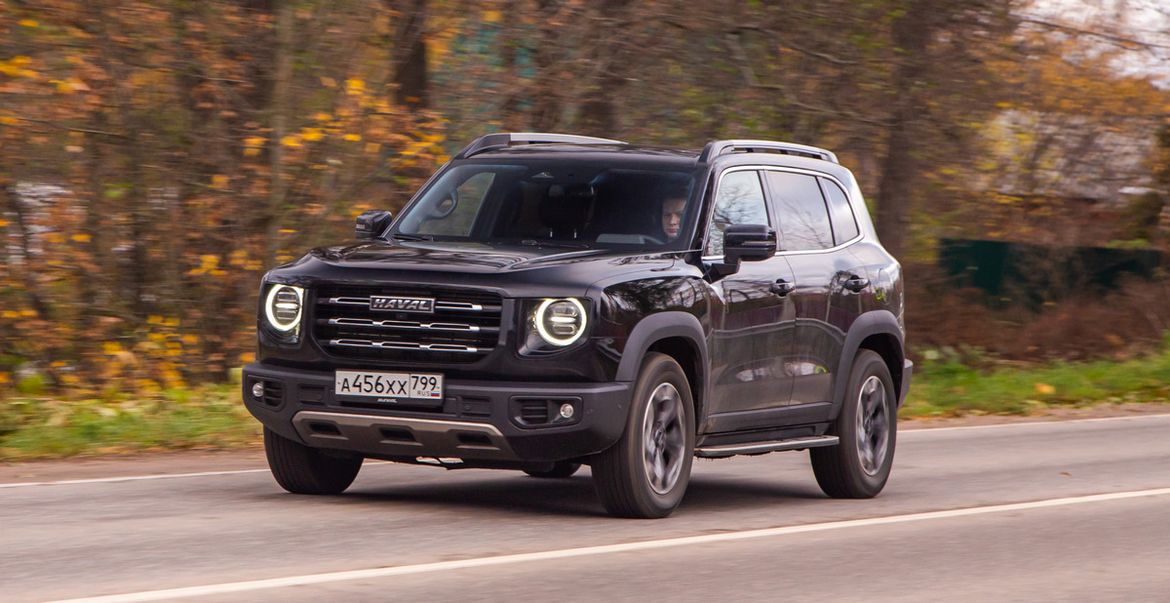 With such an appearance and pretentiousness, you expect that under the hood there will be a large atmospheric V8, well, or V6, and a Part-time transmission with “lowers” ​​and locks is responsible for cross-country ability. In fact, we have in our hands a machine on the LEMON platform: the same one on which the Jolion is built. According to the manufacturer, it has been seriously redesigned and tuned to Russian road realities. Front – suspension type McPherson, rear – “four-link”. The fifth generation Haldex multi-plate friction clutch, which is installed at the rear axle housing, is responsible for all-wheel drive. That is, on the test, we have, in fact, just a “SUV” with a connected rear axle. 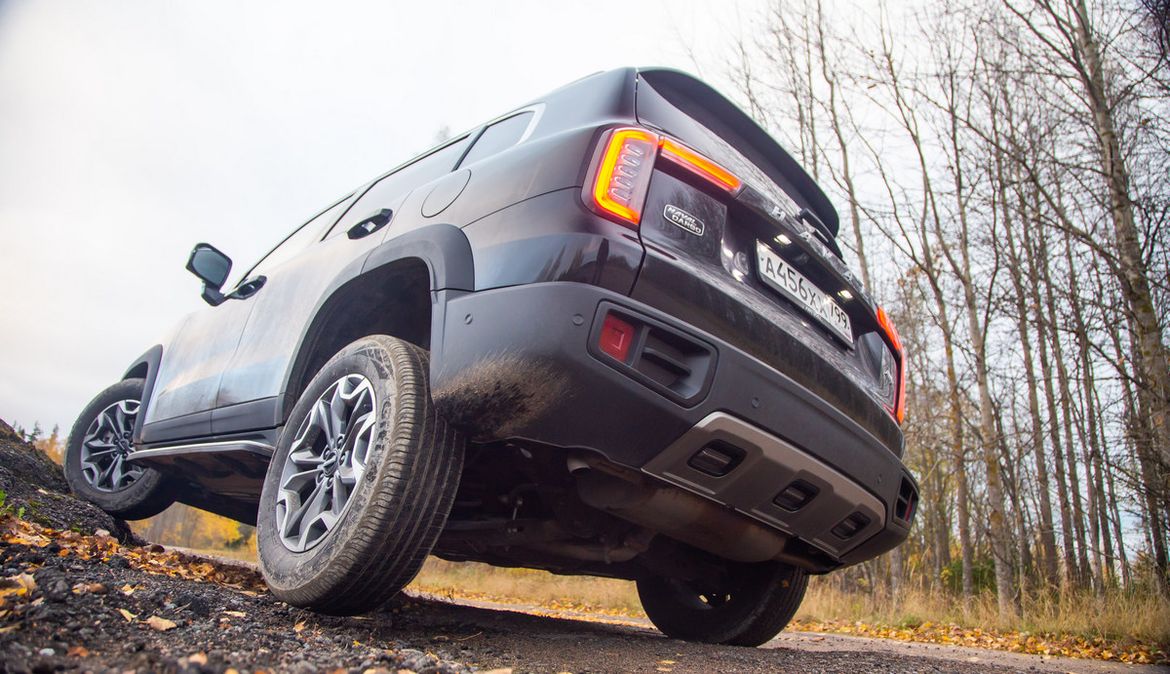 In fairness: the crossover is by no means deprived of off-road talents. Of course, if you compare it with direct competitors, and not with serious SUVs that Dargo wants to be like. A decent ground clearance of 200 mm, coupled with large suspension travels, makes it possible for the Haval to overcome very decent potholes and move quite confidently on light off-road conditions. Moreover, the motor quite allows you to overcome very serious slopes. The only thing that is not obvious is the need for such a large number of regimes, in which even an initiated person is unlikely to understand. For example, what is the difference between the “Mud” and “Bumps” modes remains a mystery to us…

The last toggle switch on the right turned out to be non-working. We suspect that there should have been a forced locking rear differential, which Dargo has in other markets
Under the hood here is technically the same engine as the F7, but structurally it is a completely different engine with an aluminum block and direct injection. This engine produces 192 hp. and 320 Nm and, according to the assurances of the Chinese, you can safely pour “92nd” gasoline into Haval Dargo. The transmission is borrowed from the F7: it is a 7-speed robotic transmission with two wet clutches, which the Great Wall concern developed in-house. 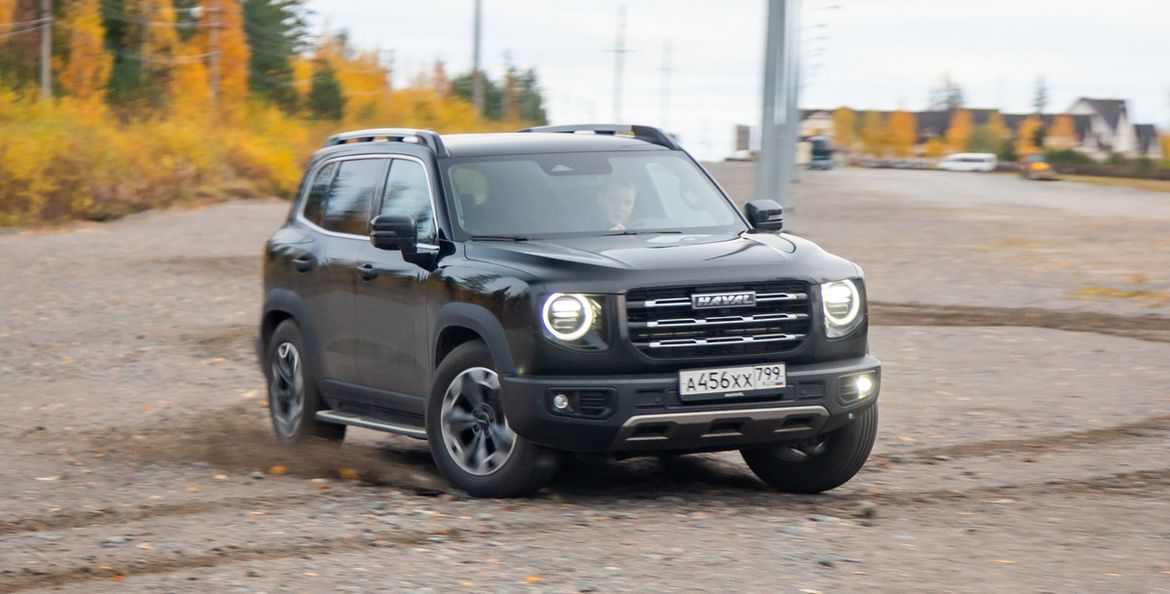 Such a power unit accelerates the crossover to 100 km / h in 10 seconds, which is quite good for this class and for a car with a curb weight of 1815 kg. True, you have to pay for the dynamics with an increased consumption of gasoline – albeit a relatively inexpensive “92nd”. According to the passport, Dargo consumes 9.2 liters of fuel per 100 kilometers in the combined cycle, but in reality, our consumption fluctuated around 10 liters.
You believe the declared dynamics without a doubt! The car, of course, does not press into the back of the seat, but it does not make you doubt your capabilities. And turns for Dargo are by no means enemies. Despite some “bloat” in appearance, the crossover obeys the steering wheel quite well and keeps the trajectory to the last, despite significant rolls. 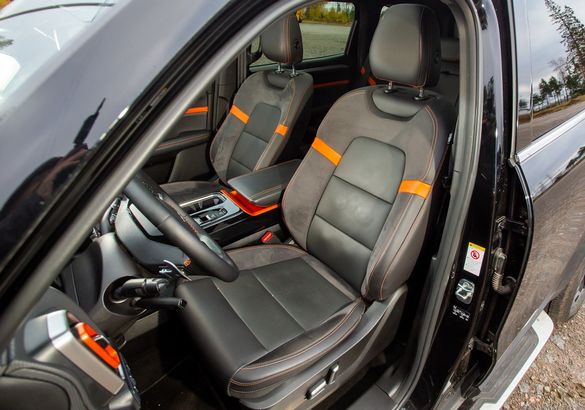 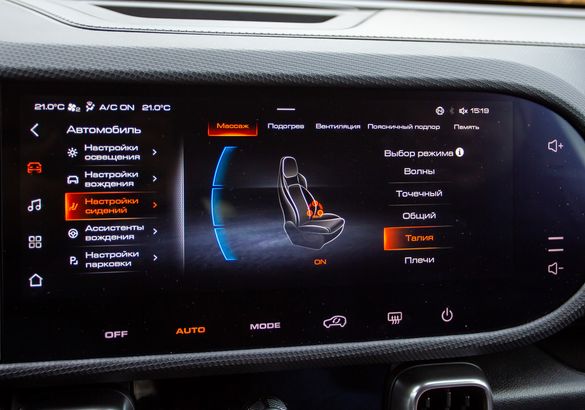 The seats in the top configuration are not only comfortable, but also very well equipped. In addition to the already mentioned heating, there is also air conditioning and multi-mode massage. And not inferior in efficiency to premium models. But such joy is available exclusively to the driver
For rear passengers, Haval Dargo will offer a soft sofa and its own air deflectors, as well as a pair of connectors for charging gadgets. However, rear passengers are clearly considered not very responsible citizens, since they are not allowed to decide for themselves when to turn on the seat heating. Although we have already discussed the general trend towards the absence of heating buttons … 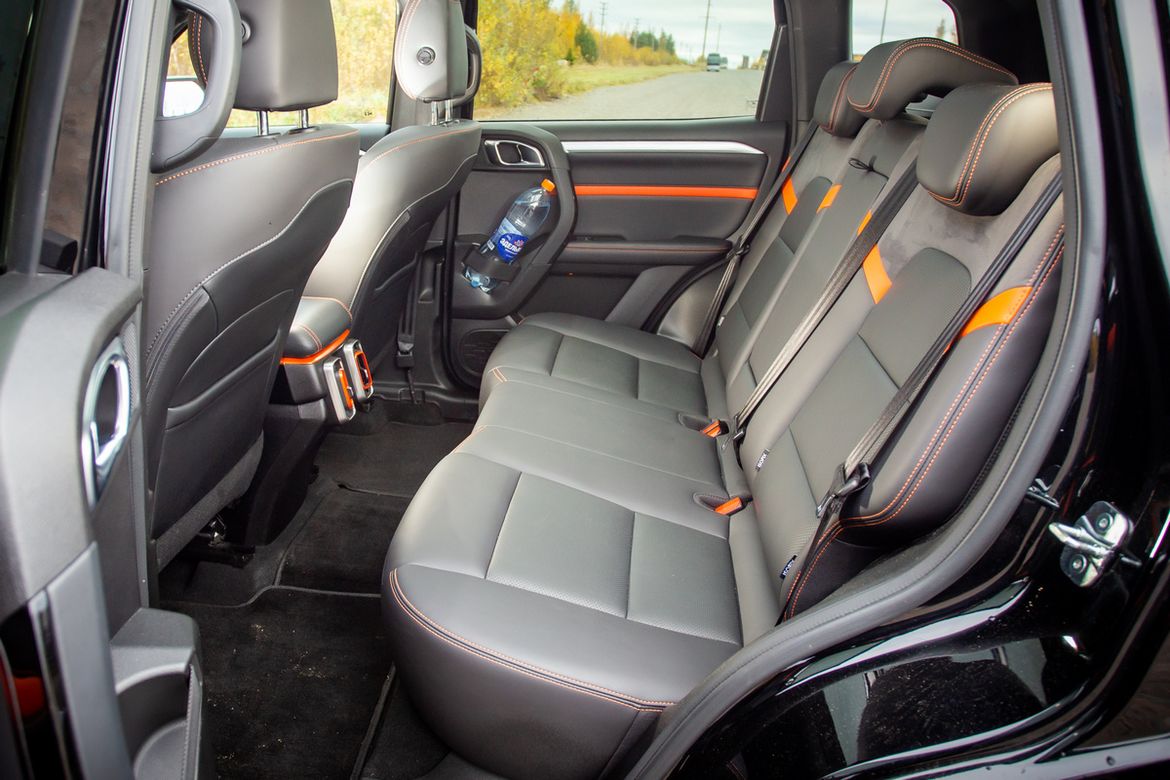 According to the tradition of recent years, Chinese cars do not indulge in large trunks, preferring comfort and space for passengers in the back. So the Dargo does not visually have a large compartment, which is most likely true, since the manufacturer himself prefers to keep silent about its size “under the shelf” and publishes only the volume of the trunk with the rear seats folded down. And even in this case, this volume is not too large – only 1342 liters. And the loading height does not add to the ease of use. But Dargo offers a full spare tire, which is rare in this class these days. 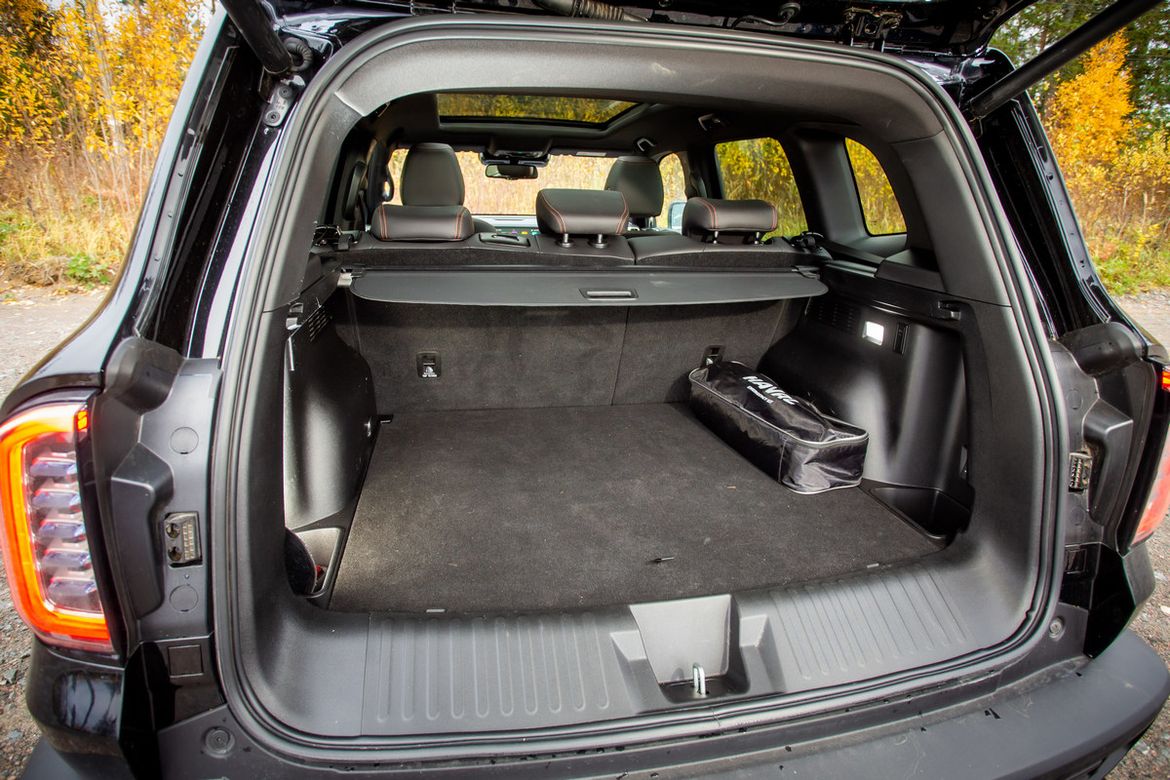 Of course, when we talk about a new Chinese car, we cannot fail to note the abundance of options and driver assistance systems. It is this trump card that marketers from the Celestial Empire are used to most actively using. Haval Dargo did not disappoint in this: a panoramic roof with a sunroof, an electric tailgate with the possibility of contactless opening, dual-zone climate control, a head-up display, a transparent hood function, seat ventilation, a massage function, a surround view system, a smart obstacle avoidance function , cruise control, sign recognition, automatic parking system and many other useful and not so functions. All this is a significant advantage over competitors, even though the price of the “Chinese” is already comparable to them. 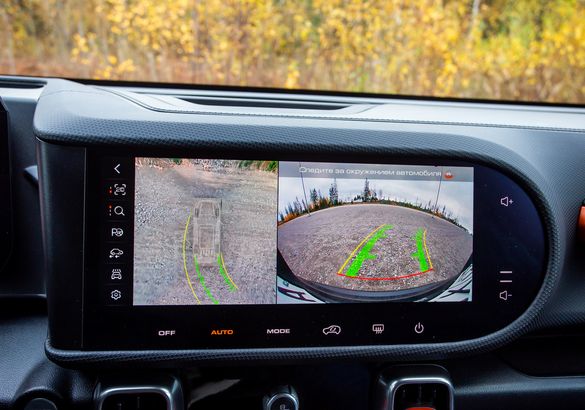 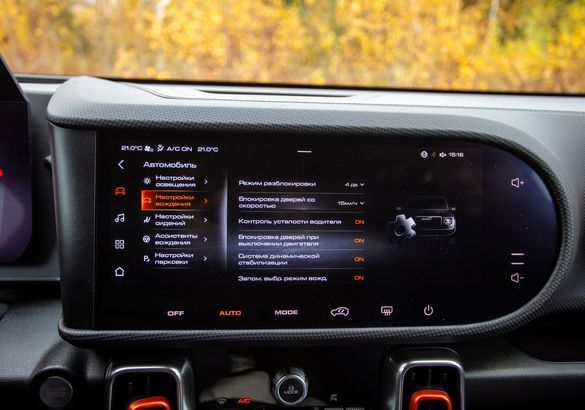 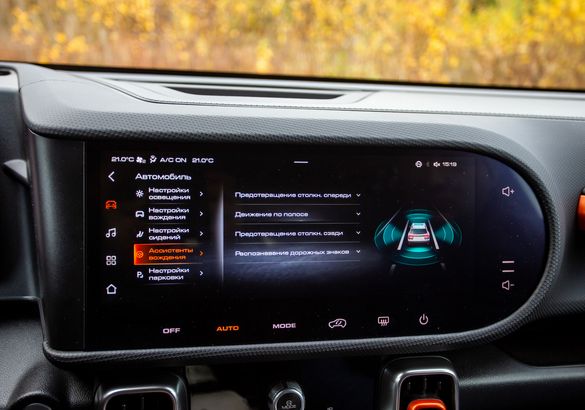 Haval Dargo turned out to be a very versatile car. The first thing you feel when meeting him is the pleasure of driving a large and beautiful comfortable car, stuffed with electronics. However, over time, this feeling begins to dull, giving way to the desire to realize the potential of the crossover to the end. For example, good off-road capabilities want to be strengthened so that the car is more in line with the expectations that arise due to its brutal appearance.

So it’s better to approach the assessment of Haval Dargo with a cool head, realizing the fact that you have a very charismatic and truly high-quality car, but still just a crossover. Which will definitely take its niche, but is unlikely to become a landmark car for the Russian market.

The new Lada Granta will enter the market in 2024

Chery spoke about new products for Russia in 2023