The premiere of the BMW M2 coupe of the second generation took place
44
0
(0 voices, on average: 0 out of 5)
With the change of generation, the BMW M2 coupe retained the “mechanics” (albeit as a paid option) and rear-wheel drive, but now it is no longer the “lightest emka”. But the cheapest.

The coupe with the G87 index is intended to replace the commercially successful M2 of the first generation, which managed to sell almost 60,000 copies. 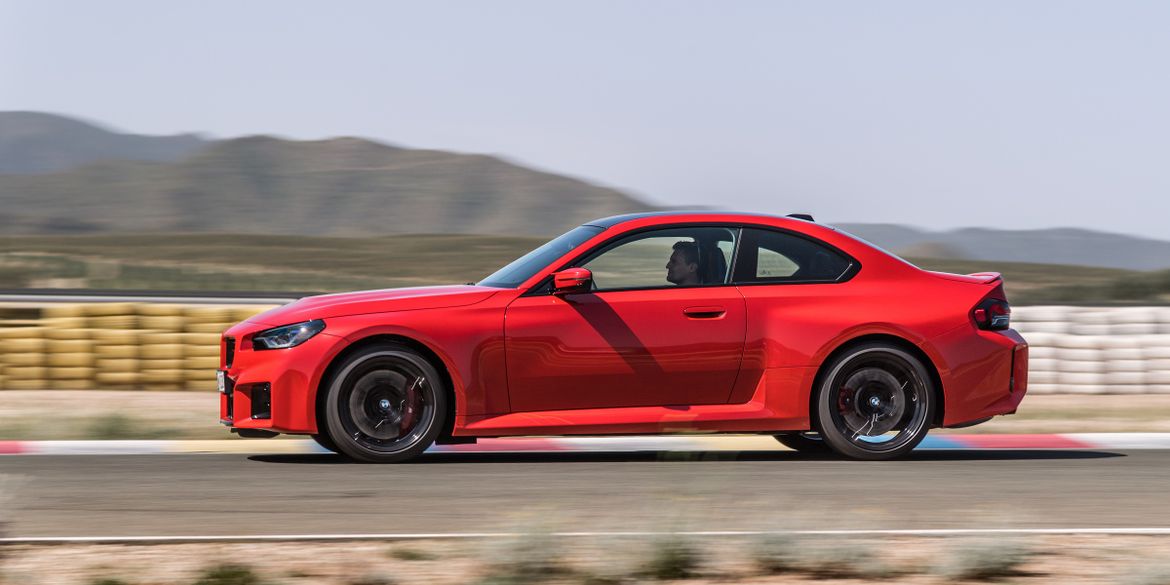 Of course, the body here is from the standard “two” – not counting the extended arches – but the front bumper greatly changes the perception of the car. The “nostrils” of the M2 are of a strict pentagonal shape, with a wide bridge, and a black insert appeared in the corners of the headlights. It visually changes the shape of the module, although it is unified with simple 2 Series. Rear bumper – with a large diffuser and four exhaust pipes with electronically controlled dampers.
Like the older emoks, the rear axle has larger wheels (R20) than the front axle (R19). By the way, the base rims on the M3/M4 are an inch smaller (R18/R19), and the old M2 had 19-inch wheels on both axles. 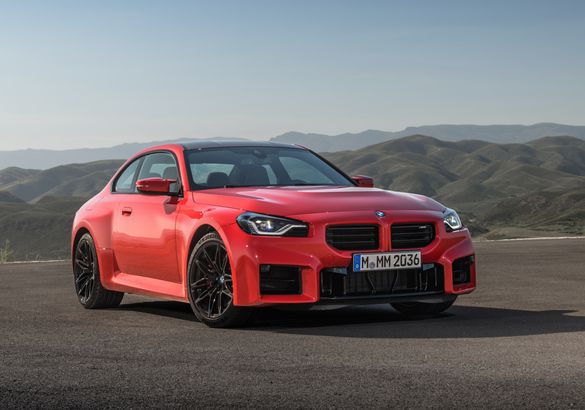 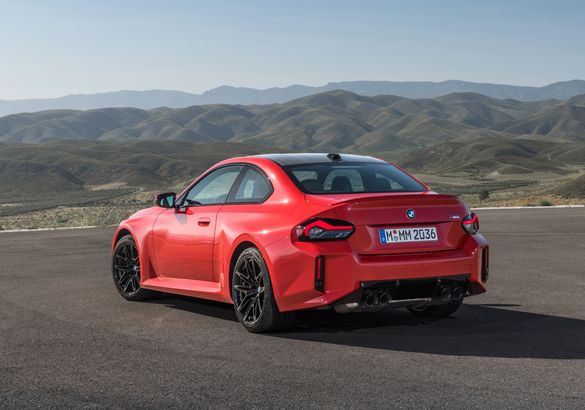 Under the hood, the M2 G87 has an in-line S58 turbo six, but its power is reduced by 20 hp. With. relative to other M-models with “mechanics” and is 460 liters. With. Torque “full”: 550 Nm. However, the curb weight of the new M2 with “mechanics” is 1700 kg – exactly like the base M4 with three pedals. And the weight gain relative to the first M2 was as much as 205 kg! But there are no problems with weight distribution: each axle accounts for 50% of the mass of the car. 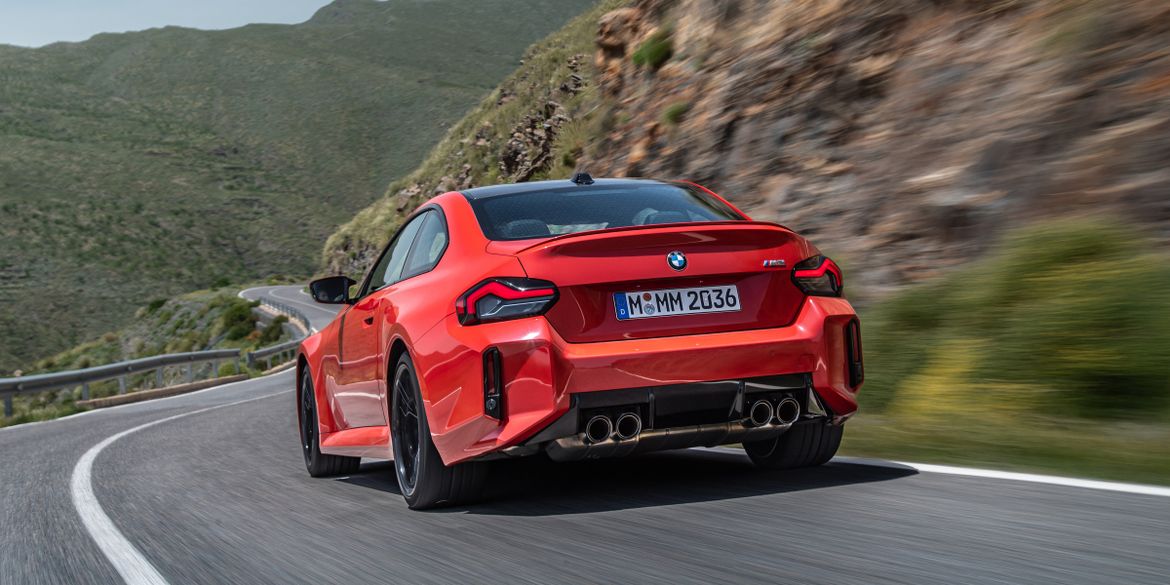 The motor is mated by default to an 8-speed M Steptronic automatic (with which the weight will increase to 1725 kg), and a manual transmission with (disabled) automatic re-gassing when switching is an option for which you will have to pay 500 euros in Germany. All-wheel drive is likely to get more powerful Competition versions, but the base M2 is rear-wheel drive.
Adaptive shock absorbers and an electronically locking rear differential are standard. Steel 380 mm brake discs with six-piston calipers are installed at the front, 370 mm discs and single-piston mechanisms are installed at the rear. 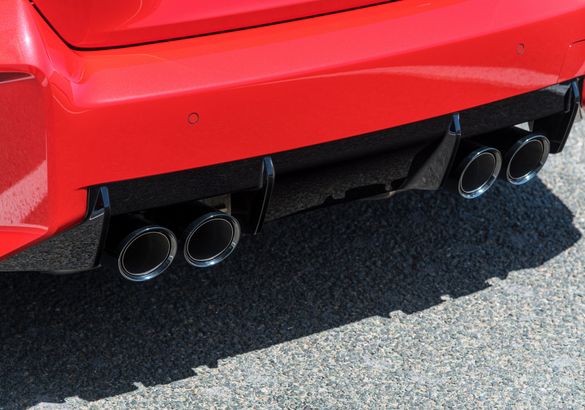 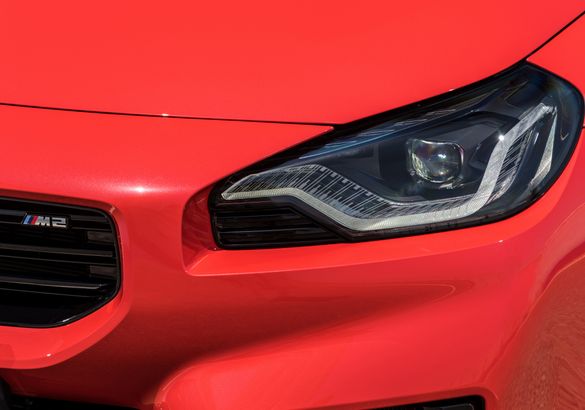 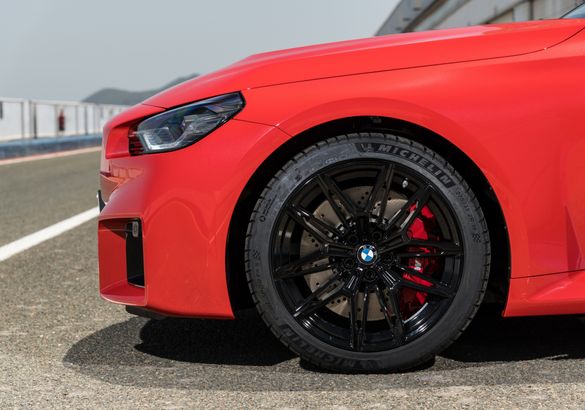 The Germans did not lie when they promised acceleration dynamics like a 450-horsepower M2 CS. M2 with “automatic” is gaining 100 km / h in 4.1 seconds, and with “mechanics” – two tenths longer (although the lighter CS is still one tenth faster). Acceleration to the second “hundred” takes 13.5 s (14.3 s for cars with manual gearbox), and the maximum speed is limited to the standard 250 km/h. With the M Driver’s Package option, it will rise to 285 km/h, which is 5 km/h faster than the M2 CS. 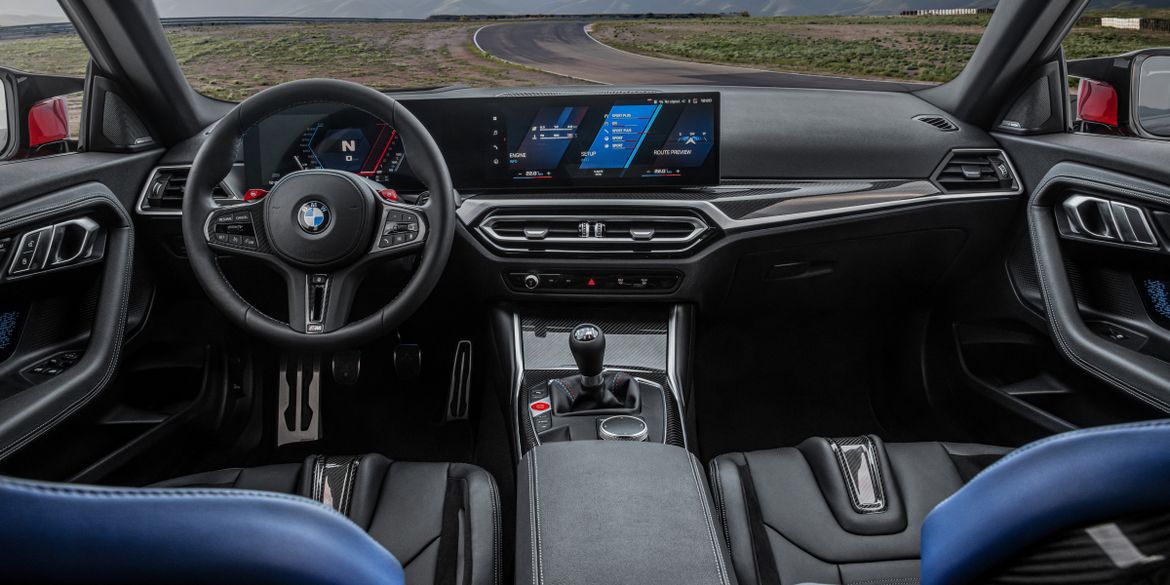 The interior of the new M2 is identical to the interior of the M240i – with the exception of the new steering wheel from the older “emoks” with red buttons M1 and M2, to which you can bind custom driving modes. The basic seats have a “civilian” profile, and as an option, seats with a one-piece headrest or carbon “buckets” are offered, which will lighten the car by 10.8 kg. Genuine leather Vernasca and carbon decorative inserts are also included in the list of options, as well as a projection display. In front of the driver is a curved panel of two displays in the style of all new BMWs without exception: a 12.3-inch instrument cluster (with proprietary M-graphics) and a 14.9-inch touchscreen multimedia system. 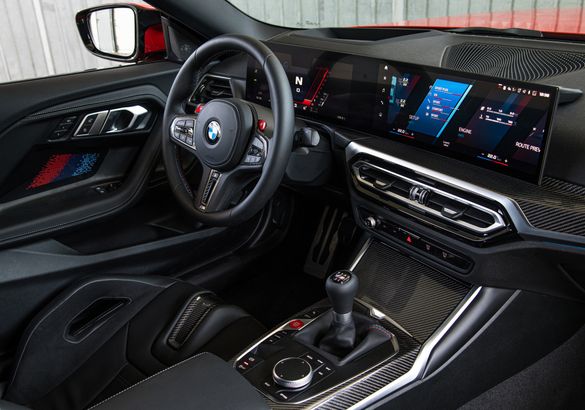 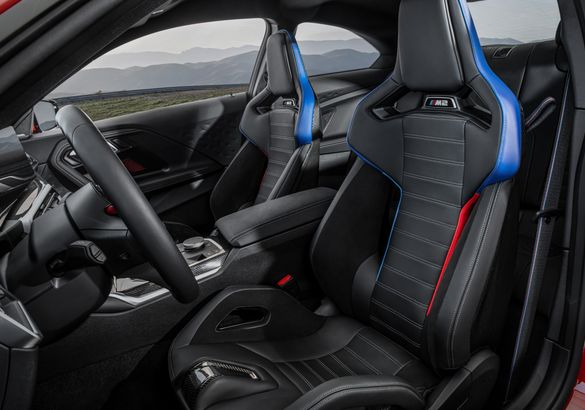 For a surcharge, you can order both a glass roof with a sunroof and a carbon fiber roof (of course, without a hatch) – the latter will help save another 6 kg of curb weight. A wide range of electronic assistants is also grouped into several fixed sets of options. A carbon-fiber roof and buckets, as well as a maximum speed increased to 285 km / h, carbon-fiber decor in the cabin and track tires make up the M Race Track option. 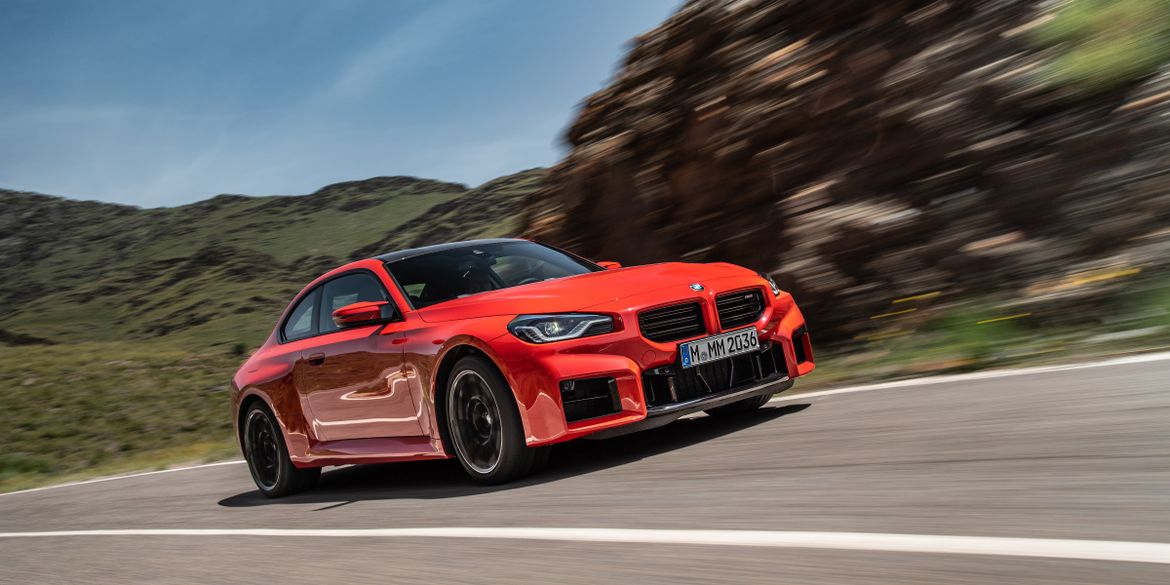 The new M2 will be the first emko with a Mexican residence: the cars will be assembled at the BMW Group plant in San Luis Potosí along with the regular 2 Series. Sales will begin only in April 2023 (Germany, the USA, Great Britain, China and Japan are named as the main sales markets), but preliminary prices are already known: the base M2 with an “automatic” in Germany will cost 72.8 thousand euros without options, in while the price list for the BMW M4 starts at 89.9 thousand euros. The conditional competitors of the new M2 can be the Mercedes-AMG C 43 coupe (from 71.1 thousand euros, 390 hp) and the Porsche 718 Cayman S (from 72.3 thousand euros, 350 hp), but ” emka “significantly surpasses them in dynamics. 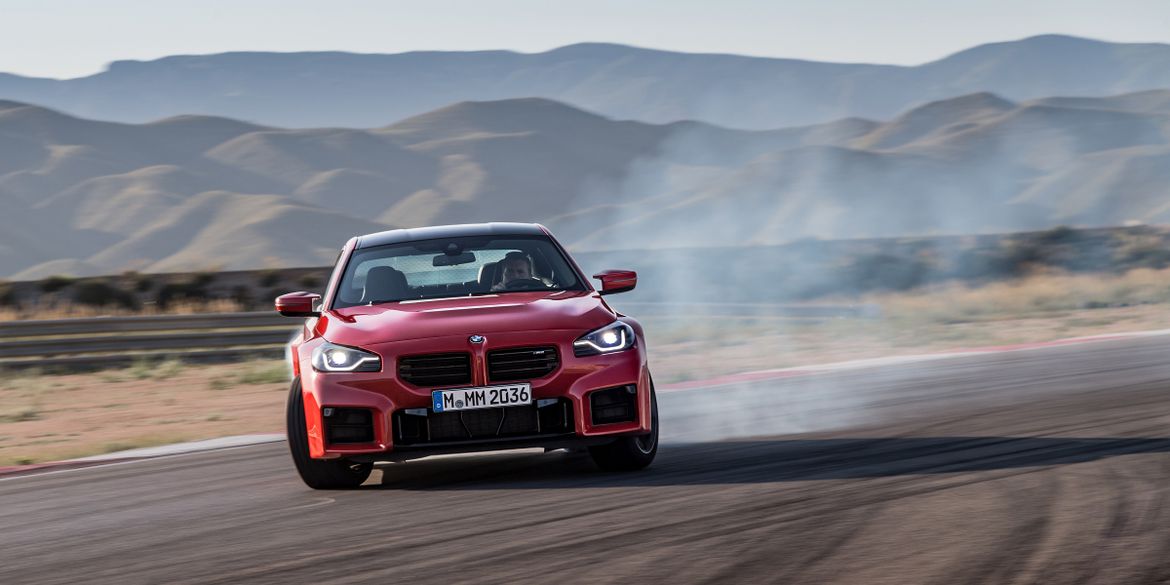 Cheaper than Tiggo 7 Pro: the new Omoda C5 was priced in rubles