Test drive Omoda C5: exotic but ordinary
26
0
(0 voices, on average: 0 out of 5)
It is unlikely that the expansion of Chinese brands would have been so active if it were not for the well-known events of 2022, but the reality is that the number of brands from the Middle Kingdom in our market is growing exponentially. We just have to learn to distinguish between these cars, which are created primarily by marketers. It will be especially difficult to do this this time, because we have in our hands a product that bears a nameplate in its homeland Chery, and only the Russians received it under the new brand. Let’s try to find out if the crossover has become Omoda C5 worthy ancestor of a new brand?

The car debuted at the end of 2021 at the Guangzhou Auto Show and was presented as a model of the Chery brand called Omoda 5.

In Russia, the coupe-shaped crossover not only appeared under a different name, but gave rise to a new sub-brand called Omoda.
Already from the name you can understand what exactly the company’s leaders were going to lure customers from their (including Chinese) competitors.
The letter O means “brand new”, and the word Moda means “fashion trend”.
The implementation of such a lofty concept was entrusted to Chery chief designer Steve Hume, who previously worked at Ford, Hyundai and GM.

The result of his work on the Omoda C5 can be assessed in different ways, but the fact that Comrade Hume really tried is a fact: the car turned out to be memorable and unusual. Chery’s chief designer can be criticized, first of all, for a certain imbalance between a massive front end with a huge radiator grille and a light, somewhat elegant rear end. Red inserts on the body and rims and the same color calipers look a little lurid. The hint of sporty style is clear, but hardly appropriate: the C5, although a coupe-crossover, is clearly not of the class to ride on track days. 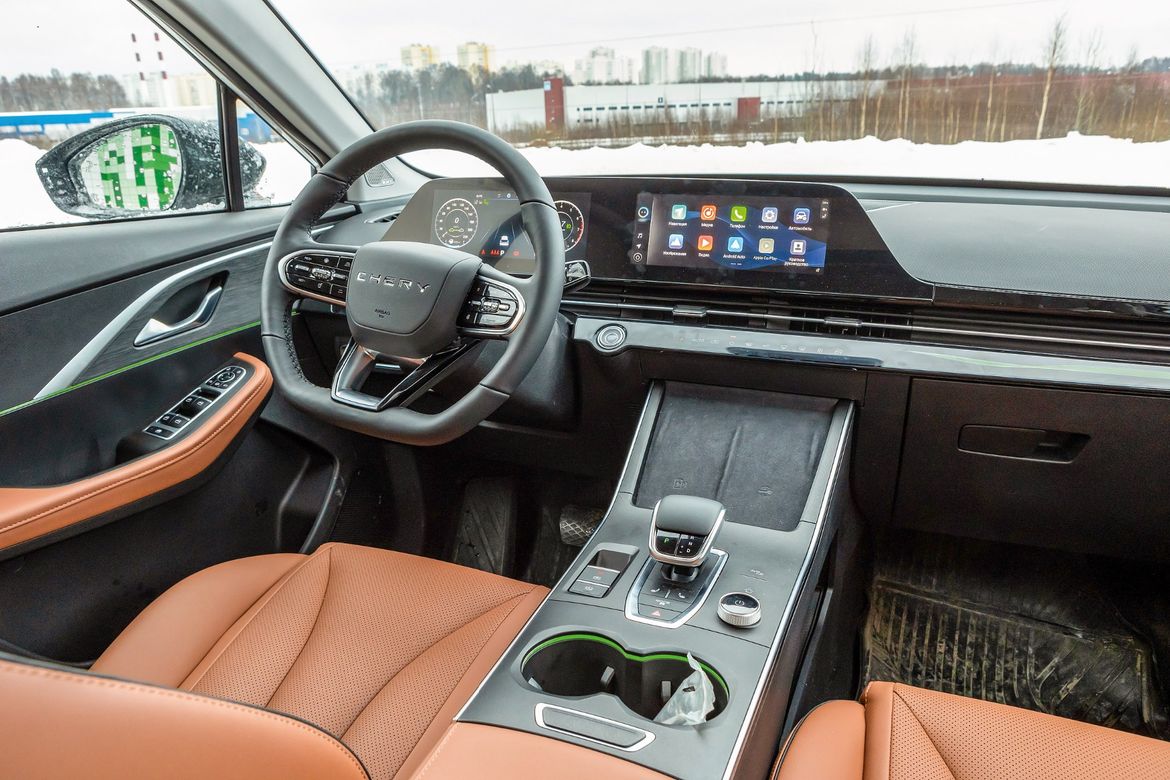 Climate control is displayed in one line of touch buttons under the display, which inevitably turns into a strip of black gloss dirty from the touch
Comfortable soft seats with three-stage heating and ventilation attract attention in the interior. But they are convenient only for drivers of average height. Tall riders will not have enough space above their heads, and having sat down “behind themselves” back, they will rest their knees on the back of the front seat. 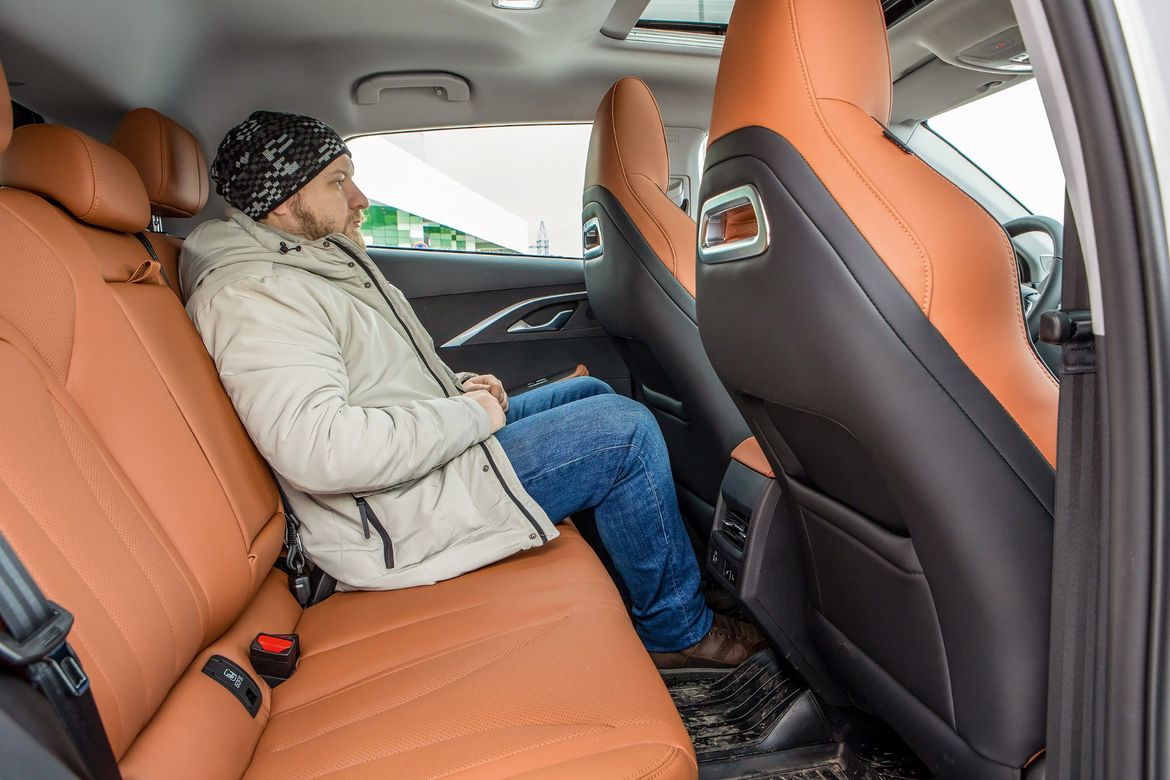 But the finishing materials correspond to the declared status of the model. If we consider Omoda cars as an intermediate link between the mass Chery and the premium Exeed, then the interior is finished somewhere at this level. Solid leather door trim side by side with frankly cheap plastic. 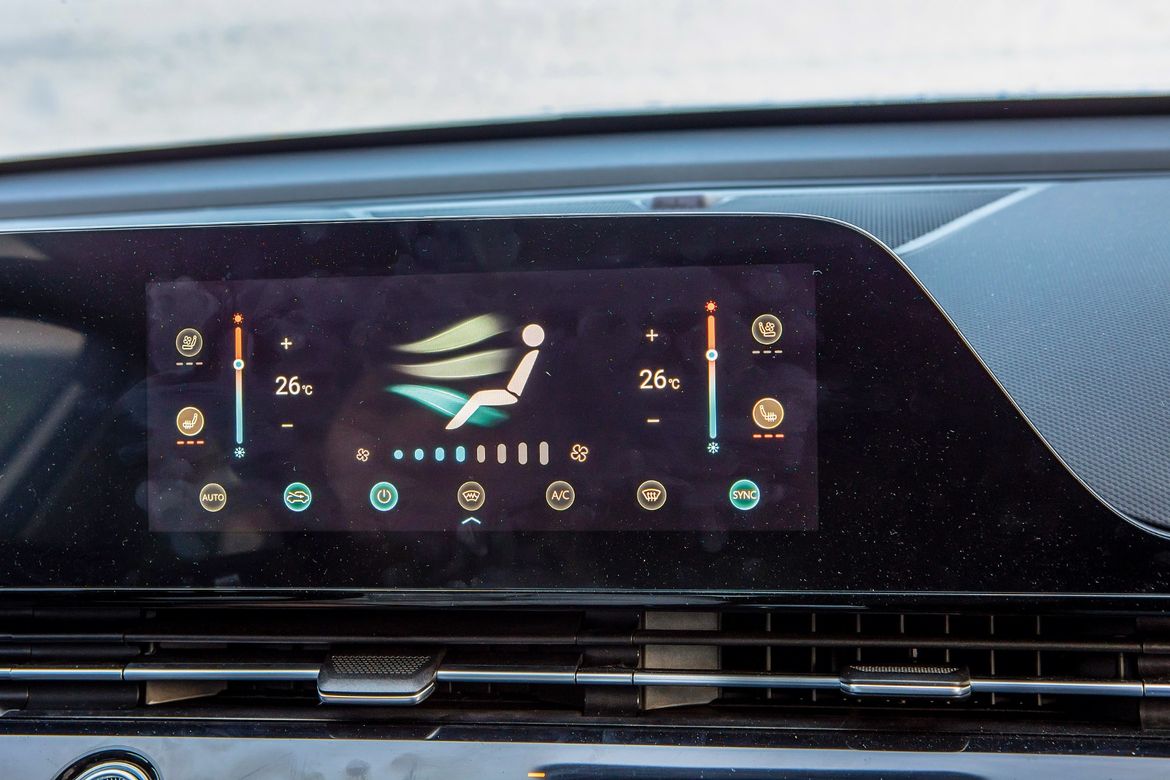 A pair of 10.25-inch combined displays is responsible for managing the main functions, which displays almost everything that is possible. It is especially good that there is a system of all-round visibility, because with real visibility our Omoda is not doing very well. The rear window is so narrow that it is simply useless for the driver, and the beveled rear “windows” leave no chance at all to park with the “eyes”. But the side mirrors are quite good, besides they are mounted on the doors without increasing the dead zone of the already massive racks. 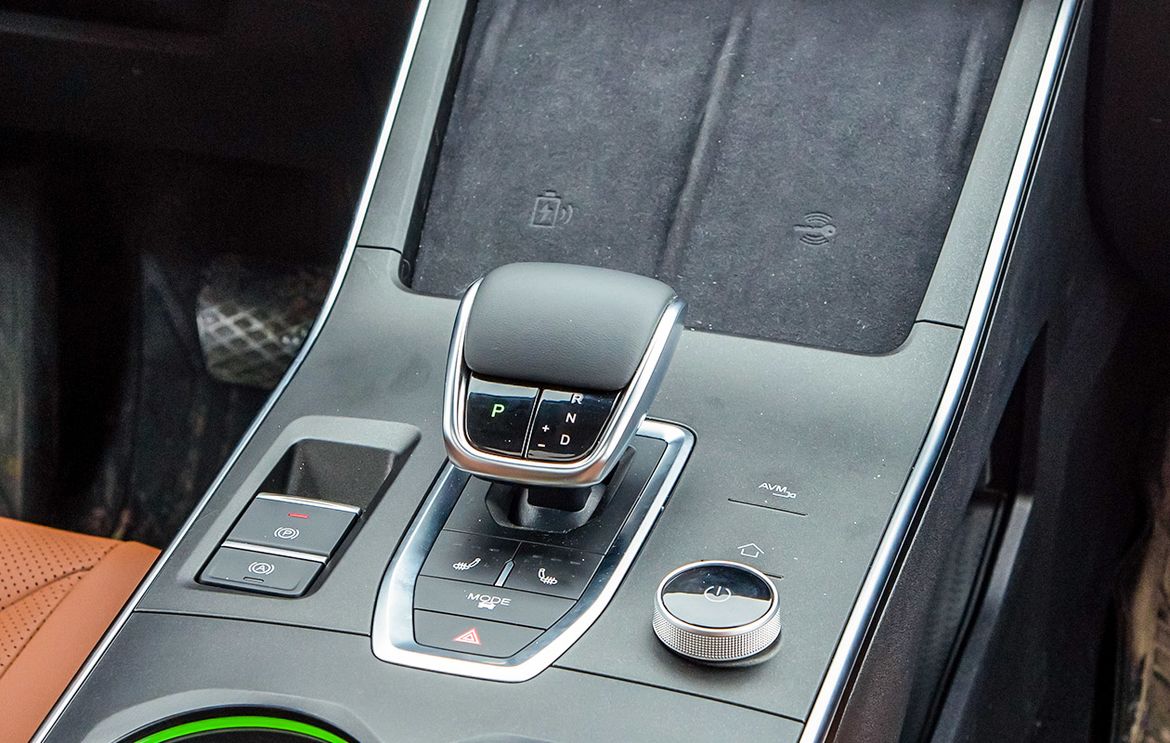 Among our colleagues, only the lazy did not note the dual platform for smartphones, one of which also has a wireless charging function. This is certainly a modern and logical solution, which, I think, will soon come to most automakers. Another successful find of interior designers is a USB connector behind the saloon mirror, to which it is convenient to connect a DVR, radar detector or navigator.
There’s also built-in navigation, but Turbo Dog 9’s system doesn’t come close in terms of usability to the most common smartphone mapping apps. The problem is that Tse-fifth works with mobile devices through a stump deck: having connected a smartphone to the car via Bluetooth, we could not turn on the mobile navigator, and the Android Auto system “hung” the phone twice.

Although the control of almost all on-board electronics is placed on the displays, the buttons for turning on the heated seats remained “physical”, located at the gearbox selector. In our conditions, this is a plus: the last thing you want in the winter cold is to wait for the display to load and look in the menu for turning on the heated seats. Although many Chinese automakers seem to think this is normal. You need to get used to the operation of the gearbox selector itself. To unlock the joystick, the brake pedal must be pressed with remarkable effort. 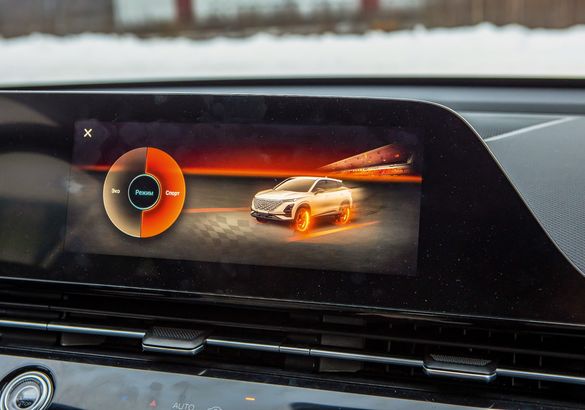 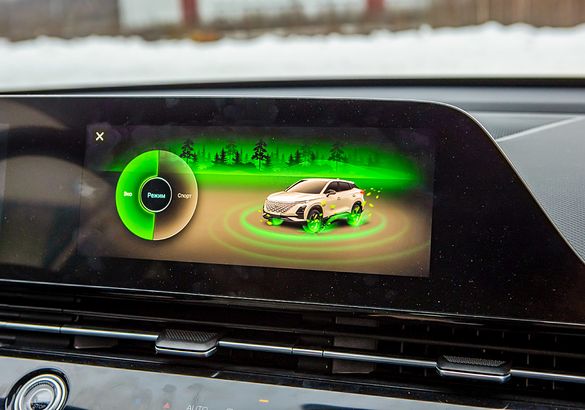 Omoda C5 does not recognize gray shades. Judging by the driving modes, the driver has little choice: either burn the brake discs in the “Sport” mode, or knead the grass in the “Eco” mode.
Under the hood of the test “Omoda” there is a turbo engine from Chery already known to us, which can only boast of passport consumption. Otherwise, the engine is nothing outstanding: the usual 147 “horses” pull confidently, but nothing more. The variator is also clearly not set up to provoke the driver into action. Not only that, there is an obvious delay between pressing the pedal and the start of the car when starting from a standstill. In general, Omoda C5, as it were, says to the owner: “You already look so cool, why do you need to prove something to someone?” 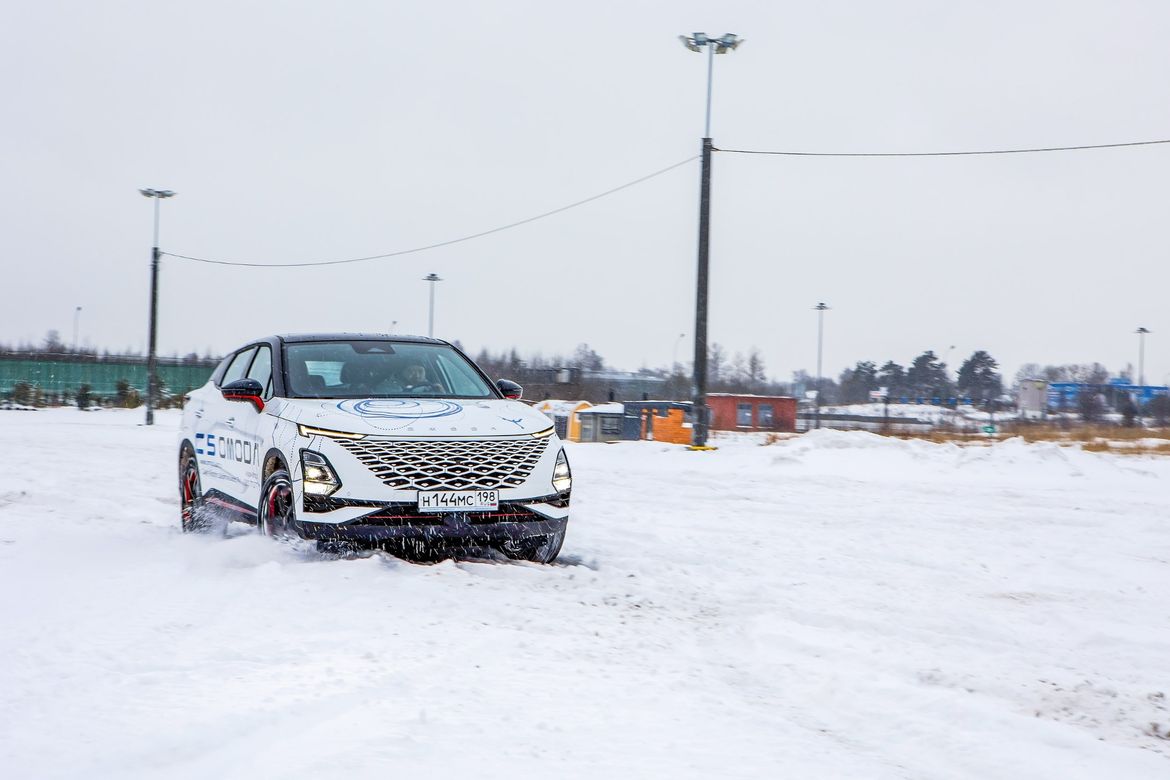 But the sound insulation allows you to enjoy the silence in the cabin: you can’t hear either the motor (even when you actively press the pedal), or the noise overboard. It’s only a pity that the Sony system is clearly not playing at a premium level, although the “music” went to “Omode” from the premium “brother” Exeed … The inhabitants of the rear seats will also complain about the comfort of the fit: the angle of the backrest and the cushion of the “sofa” every time makes you feel like you’re sitting in a hole. Although there are no complaints about the softness of the seats, there are doubts that a trip of a couple of hundred kilometers will be pleasant. The presence of heated seats is little consolation. 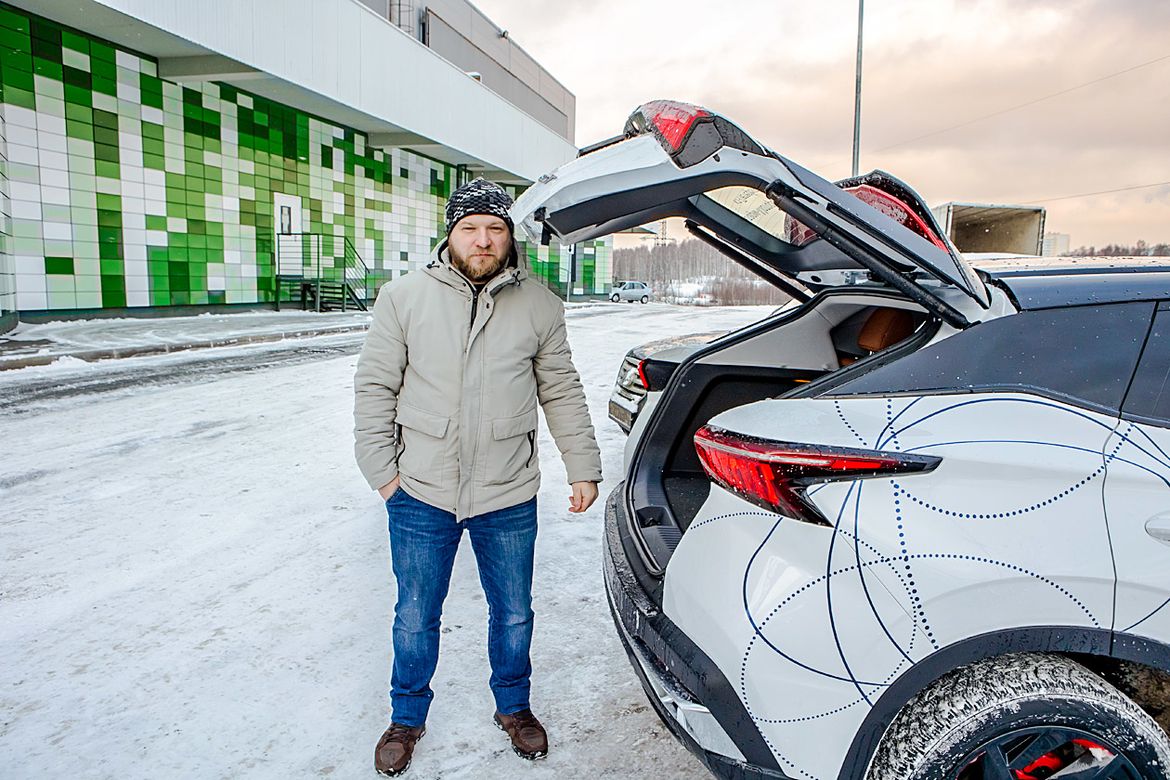 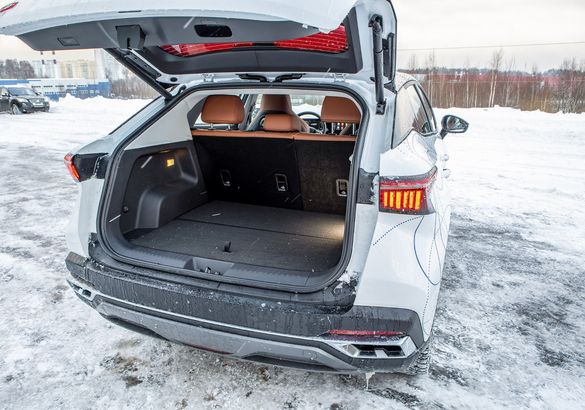 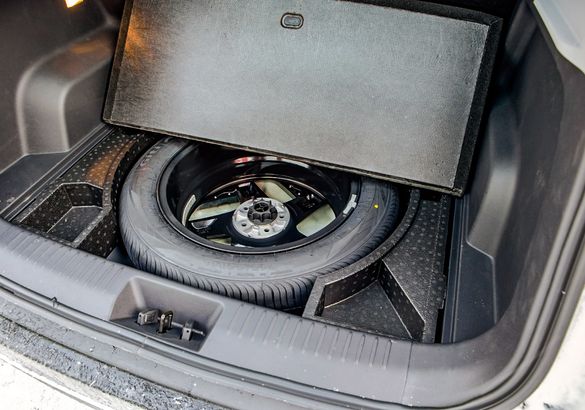 The tailgate of the test car did not rise above roof level. Probably, ice has frozen in the trunk opening after washing in the cold. Colleagues had no such problems.
With this arrangement of the rear seats, you expect that the trunk will please with the size and finish, but it pleases only with a full-fledged spare wheel underground. The cargo compartment here is small both according to the passport (378 liters) and by eye. In addition, the body, which is sloping due to its coupe-like appearance, will not allow you to transfer anything large even with the seats folded down. The Chinese also saved on hooks and nets.

From the handling of a car with a somewhat eclectic appearance, you do not expect anything outstanding. However, if you are not too picky in this matter, Omoda C5 will pleasantly surprise you. Yes, there are certain complaints about the car (for example, to an insufficiently informative steering wheel), but in general, the chassis with a semi-independent rear suspension is set up well. But the designers obviously have to work on the smoothness of the ride during restyling: 18-inch wheels do not add comfort to the already stiff suspension. The car still copes with small bumps and joints, but potholes or speed bumps are difficult for it. 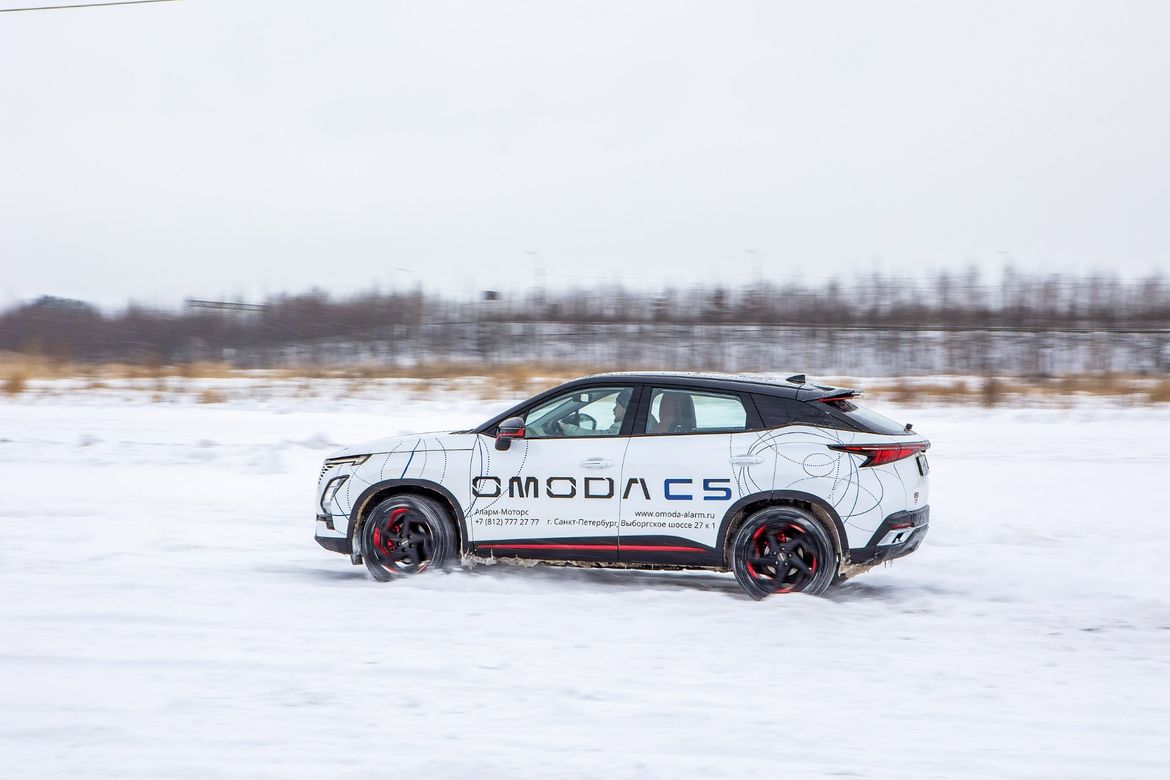 Omoda C5 tries to compensate for almost all its shortcomings with a large number of electronic “chips” and options, which, in principle, are already familiar to us from Exeed models. Front and side airbags, dual-zone climate control, cruise control, parking sensors and a rear view camera, heated steering wheel, seats, keyless entry – all this is already in the “base”. In the “top”, a good all-round visibility system, active cruise control, which works flawlessly even in heavy snow, and much more pleases.

Of course, the Omoda C5 has its strengths: although it is controversial, it is still an unusual appearance, as well as many electronic systems and options that for a certain group of potential buyers can become an important buying argument. But in general, this is just another front-wheel drive crossover, which seems to be not faceless, but there is nothing memorable about it either. At least significant advantages over the two main competitors from China – Geely Coolray and Haval Jolion – Omoda C5 was not found. And even the Nissan Juke could not leave due to its unusual appearance in our market. So let’s see if the Russians will fall for the lure of design and manufacturability.
Photo: Dvizhok magazine

We thank the group of companies “Alarm-Motors”, the official dealer Omoda in St. Petersburg, for the car provided for the test.

Chevrolet Bolt may catch fire in an accident