Test drive of the updated Geely Tugella: not like everyone else … “Chinese”

Test drive of the updated Geely Tugella: not like everyone else … “Chinese”
38
0
(0 voices, on average: 0 out of 5)
Chinese cars do not stop flooding not only our roads, but also various sales tops, occupying already very high positions. The recipe for success is simple and clear: a beautiful wrapper, maximum equipment and technology, an emphasis on comfort and a price cheaper than direct competitors. That’s just the dynamics of the car from the Celestial Empire had not been pampered before. Until the Geely Tugella coupe-crossover appeared. Let’s see if the fastest Chinese car in Russia can open up new advantages for our consumer when buying a car from China? Moreover, now the crossover has come to us already in an updated, “sported” form.

Different car companies have different strengths. Someone makes excellent motors, someone tunes the chassis the best, and someone’s cars are famous for their reliability. What can be said in this regard about Geely? They’ve clearly become adept at… buying other companies.
The acquisition by the Chinese in 2010 of a 100% stake in Volvo Cars from Ford Motor was a turning point for the brand, and already in 2012, a technology transfer memorandum was signed between manufacturers. Actually, it is Swedish technologies that underlie all Geely new wave models, but this is especially pronounced in Geely Tugella.
To begin with, Peter Horbury, who worked at both Ford and Volvo, was responsible for the design of the model. He also participated in the development of previous models of the concern, which always corresponded to modern trends and were devoid of a hint of noisy “Asianism”, which even some very well-known Chinese manufacturers still sin. Perhaps many had doubts about restyling, since often small local changes in design can spoil the overall style of the car. In this case, Tugella did not risk anything: the update in Russia was purely formal.

In fact, the updated crossover coupe just got the appearance of the Geely Xingyue S, the “sporty” version of the Tugella for the Chinese market. For those who do not see much difference, let us recall what has changed: the restyled car received a differently designed radiator grille, a black trim on the front bumper and four exhaust pipes instead of two. Such a neat facelift in this case is rather a plus, because even before that the car looked very nice.

Inside Geely Tugella largely repeats the style of Atlas Pro. Almost all on-board systems and basic functions are controlled by a 12.3-inch touch screen. By the way, there is something to manage: Chinese cars traditionally offer very wide opportunities for personalization. In this case, the driver is by no means only power-adjusting the seat in 12 directions with memory functions – there are also a number of “deeper” personal settings. For example, several combinations of instruments can be displayed on the projection display at once, it is also possible to turn off or turn on various warning systems; in addition, you can choose a theme for the digital dashboard. 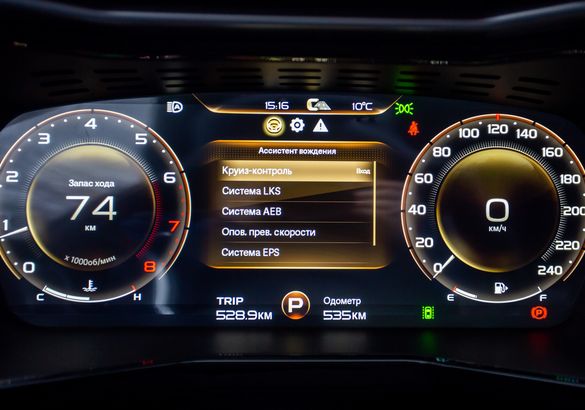 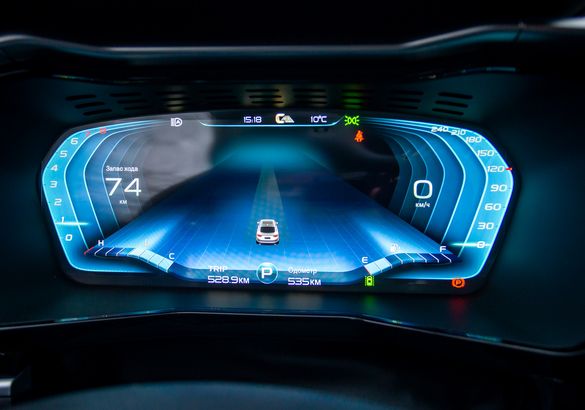 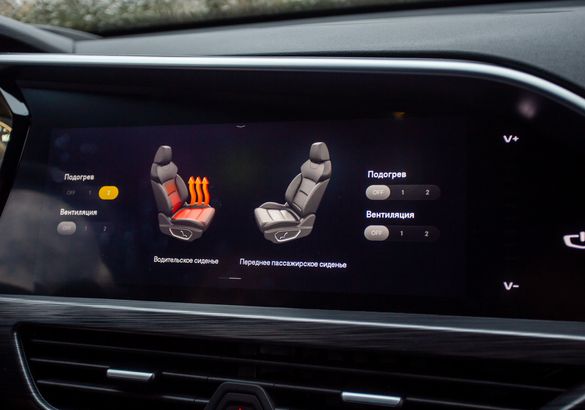 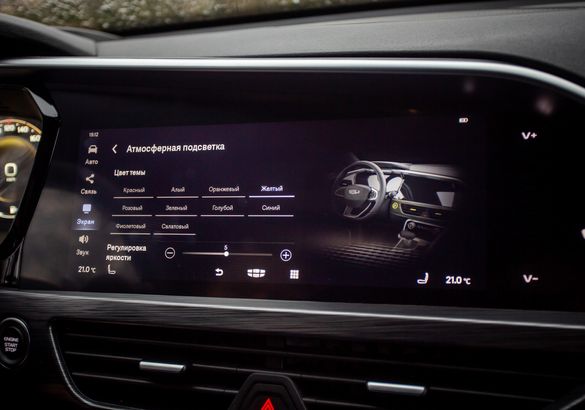 In the “analog” version – only the buttons responsible for the climate system; even the seat heating controls are wired into the display
The Bose audio system with 12 speakers and a 300 W subwoofer is responsible for the sound in the cabin; You can listen to music from your phone using the Easy Connection communication protocol, which allows you to display a picture from your smartphone. There is also a function of wireless charging of a smartphone – however, the corresponding platform is located for some reason in the “basement” under the central tunnel, although there is a place directly on it that is ideal for this type of charging. 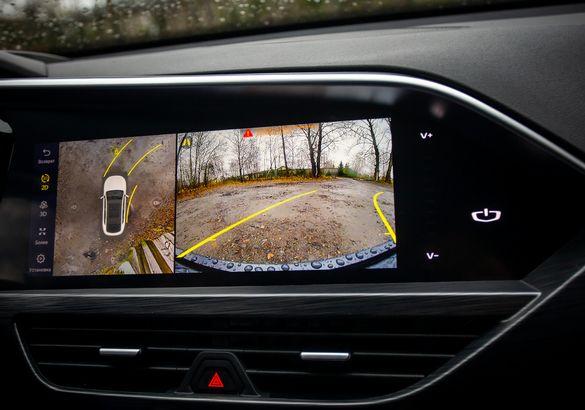 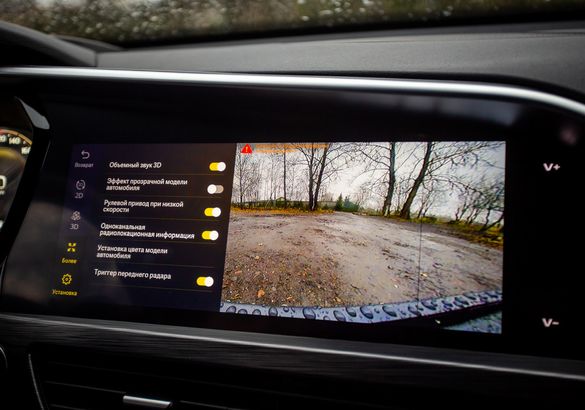 The all-round viewing system is executed at a very good level, the resolution of the picture from the cameras does not raise questions, but the number of settings will make even an experienced user tense
Passengers in the back of the Geely weren’t given much attention. “Coupe-crossover” form factor, of course, beautiful, but you have to pay for everything. In this case, it will be passengers who are taller than average, who obviously do not have enough legroom, and there is almost no headroom. And a panoramic roof with a spectacular black upholstery of the ceiling is unlikely to sweeten this bitter pill. The rear seats are soft and comfortable, but they are not adjustable. But there are own airflow deflectors and dual-zone heating, as well as connectors for charging gadgets – both regular USB and Type-C. 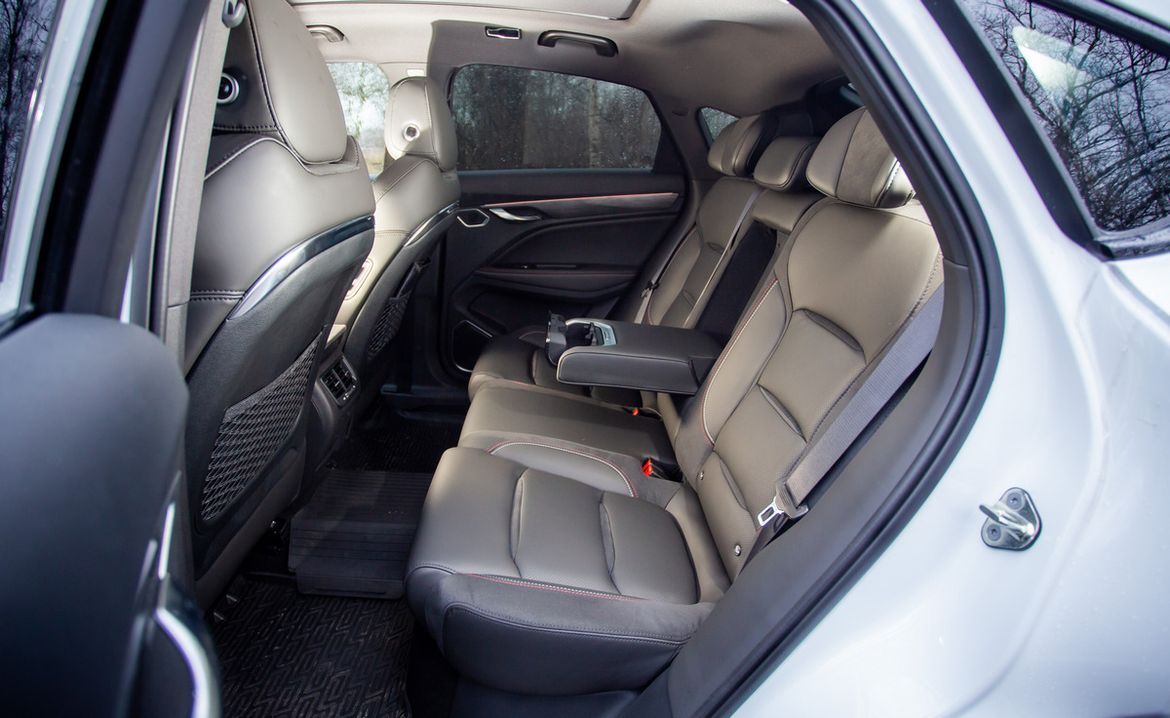 The trunk is probably the most controversial thing in this car. On the one hand, dreaming of a capacious cargo compartment in a coupe-crossover is somewhat silly. On the other hand, we are already used to the fact that the Chinese traditionally sacrifice trunk volume for the sake of space in the second row of seats. But in the “Tugella”, as we have already found out, the back seats are back to back. And if you consider that the car is not equipped with a full-size spare wheel, but a “stowaway”, it seems that the Chinese have clearly lost a number of precious cubic centimeters somewhere: 326 liters under the shelf and 446 liters without it – far from the limit for a car of similar dimensions ! And the loading height is too big. 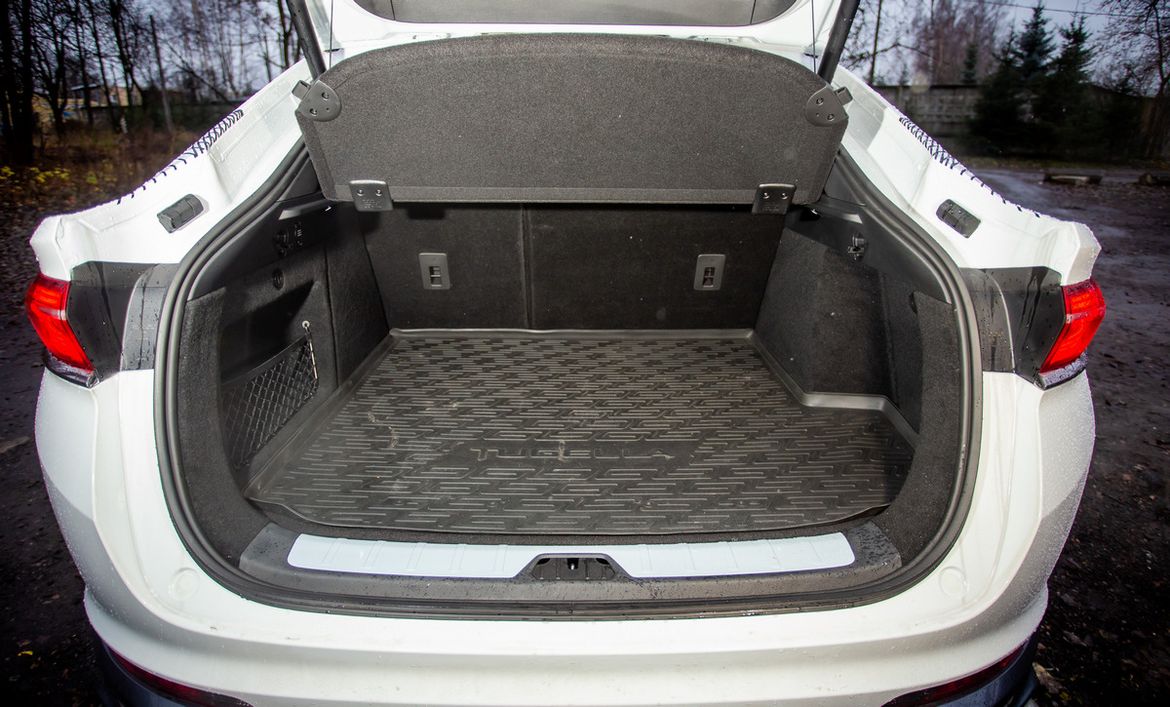 The compact size of the trunk is compensated by the presence of hooks, nets, soft trim, protective aluminum lining and an organizer in the underground next to the “stowaway”
And what about the technical part? Here again, the Scandinavian past and the present of Geely are recalled. Tugella is built on a Swedish platform – the same as the Volvo XC40. Under the hood, everything is traditionally covered with plastic protection, and already under it there is also a well-known product of the Swedish engineering school. This is a 4-cylinder Volvo modular turbo engine with an aluminum block and direct injection, developing 238 hp. with. and 350 Nm of torque. The engine is paired with the classic 8-speed “automatic” company Aisin. All-wheel drive is connected by an electro-hydraulic Haldex clutch on the rear axle.

It is in the motor and its tandem with the “box” that the main trump cards of the updated Gelly Tugella lie. At least, if we talk about Chinese competitors (and which ones still remain?), And regardless of the class. The fact is that now there are more powerful machines from the Middle Kingdom on the market – at least in terms of the number of “horses”. But even the premium (according to Chery) Exeed VX with 249 hp. with. exchanges the second “hundred” in only 8.5 seconds. Tugella accelerates to 100 km / h in … 6.9 seconds! A very good result for a car of the brand, which some ten years ago offered the Russians an ultra-budget Geely MK sedan.

We unconditionally believe in the declared figures of the passport acceleration: the tandem of the Swedish turbo engine and the Japanese gearbox works almost perfectly, there are no dips in traction when shifting gears: during acceleration you see only a change of numbers on the dashboard display. The Swedish “cart”, in turn, did not give a single reason to doubt the ability of the car to keep the trajectory even with very sharp maneuvers.
Surprisingly, with such a car’s ability to actively drive, it cannot be said that the balance of the crossover was taken towards handling at the expense of the comfort and energy intensity of the suspension. “Tugella” easily swallows small bumps, and large joints and potholes do not cause any critical inconvenience. Speed ​​bumps are also not a problem for a coupe-crossover. 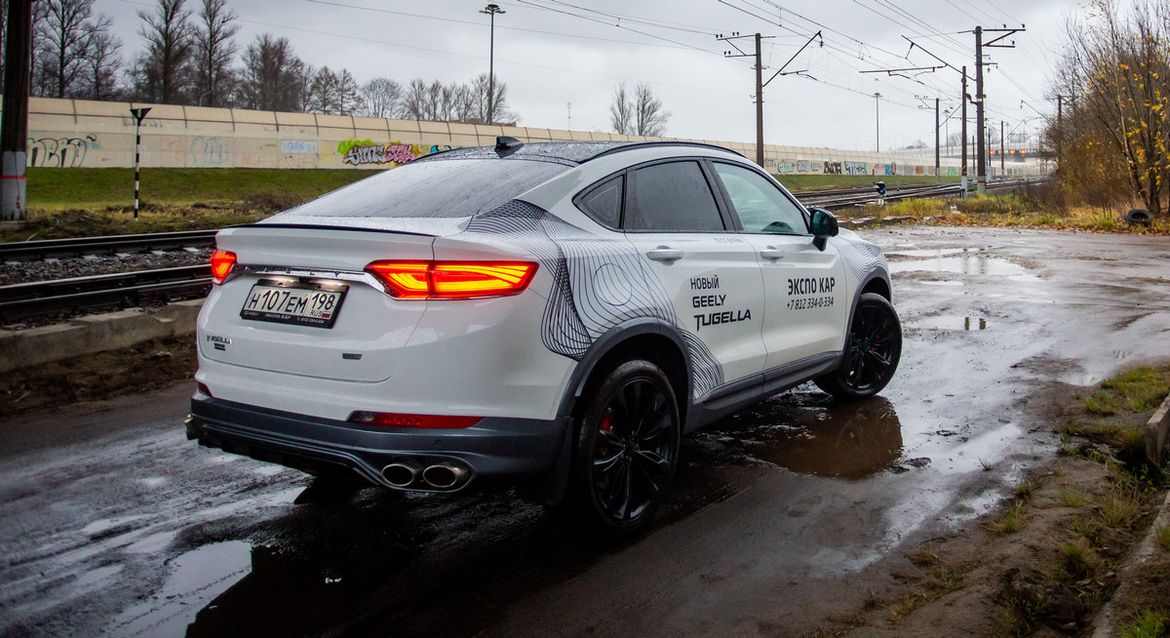 But in order to think even about light off-road, Geely Tugella will have to remove the excellent Goodyear Eagle F1 tires. Since they are excellent only for asphalt. To drive on these tires on a mound covered with wet autumn foliage is already a success, while a primer washed out by rain can turn into an insurmountable obstacle. Although theoretically the crossover has very good capabilities: after all, the 204 mm clearance and Haldex on the rear axle, coupled with advanced electronics in Off-Road mode, are unlikely to make Tugella worse than most competitors on light off-road.

Most of the “Chinese” leaves a double impression of themselves, as a rule: the pleasure of owning a very technologically advanced car is smeared with dubious driving characteristics. Tugella in this sense is unlikely to disappoint its owner: having fully realized the possibilities of the Swedish platform and created a beautiful and optionally rich car, Geely has finally offered the Russians a good balance of basic consumer qualities. Well, slight flaws in terms of cargo-passenger capabilities are quite explainable by the specifics of the form factor: hardly anyone buys a coupe-crossover in order to carry seedlings to the dacha.
We can really regret only one thing: at current prices for new cars, only very, very poor Russians will be able to appreciate all the advantages of Geely Tugella! ..

We thank the Expo Car company, the official Geely dealer in St. Petersburg, for the car provided for the test.

Volkswagen is preparing an updated ID.3