Test drive Evolute i-Pro: all the pros and cons of the first serial Russian electric car

Test drive Evolute i-Pro: all the pros and cons of the first serial Russian electric car
24
0
(0 voices, on average: 0 out of 5)
There is a feeling that sooner or later a big book will be written about the history of the appearance on the market of the first Russian electric car: so many intricacies happened on this thorny path. There are about half a dozen announcements and startups alone. One way or another, the first mass-produced electric car under the Russian brand entered car dealerships in the fall of 2022, and its name is Evolute i-Pro. We evaluate all the nuances of a curious car in St. Petersburg, which is preparing for winter.

In fact, both ordinary people and many auto experts have always treated the appearance of an electric car in Russia with a fair amount of skepticism. Even from the giants of the global auto business I heard: they say, why in a country that ranks first in hydrocarbon reserves, electric cars ?! There were reasonable arguments about a number of solvable and unsolvable problems that hinder their operation: from underdeveloped infrastructure to gigantic distances and a harsh climate.
Despite all this, the Russian state, with admirable tenacity, invested huge amounts of money in the launch of at least some automotive eco-project – from the factory Lada Hellas to the semi-handicraft Zetta. In official comments about the development of new technologies in the country and concern for the environment, stimulating young engineers, creating jobs and keeping up with the whole civilized world, one thing was read: to show that in Russia cabbage soup has long been slurping not bast shoes. A variety of “photo-toads” that flooded the Internet, where, against the backdrop of a Tesla flying into space, UAZ announces the release of a new version of the “loaf”, produced since 1965, were especially annoying.
But, alas, the executors of the projects completely failed. Another hundreds of millions of rubles written off as losses, including state investments, have so far put an end to private start-ups. Reinventing the wheel called E-Neva is now entrusted to one state-subordinated organization, the defense state corporation Almaz-Antey, which has not yet failed. Everyone else was given the go-ahead to localize the technologies of friendly countries that managed to master the technologies of civilized countries. Simply put, the Russian auto industry has been transferred to China for development.
In fact, the manufacturer Motorinvest from Lipetsk chose the latter path, choosing electric vehicles from the Chinese concern Dongfeng as an object for development. (To complete the picture, we add that the revived Moskvich, as well as the commercial division of Sollers, will be engaged in the production of Chinese electric vehicles and JAC vans at their sites, and Kaliningrad Avtotor is negotiating with the Chinese BAIC.) 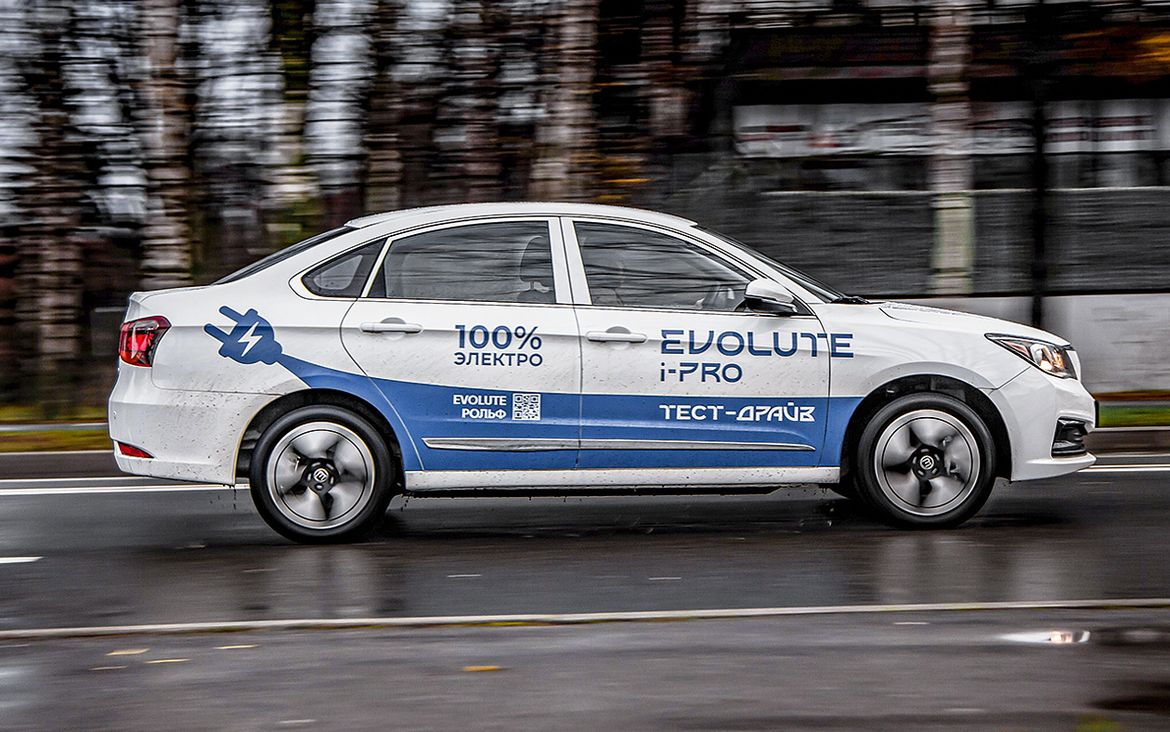 Evolute i-Pro is a localized Dongfeng Aeolus E70 electric sedan, which, in turn, is a clone of the Japanese Nissan Bluebird Sylphy of 2005 with an electric motor instead of an internal combustion engine. The body of this car is well known to the Russians: it was it that was once “crossed” with the French B0 platform and began to be sold in our country as the Nissan Almera III. That’s what globalization is… 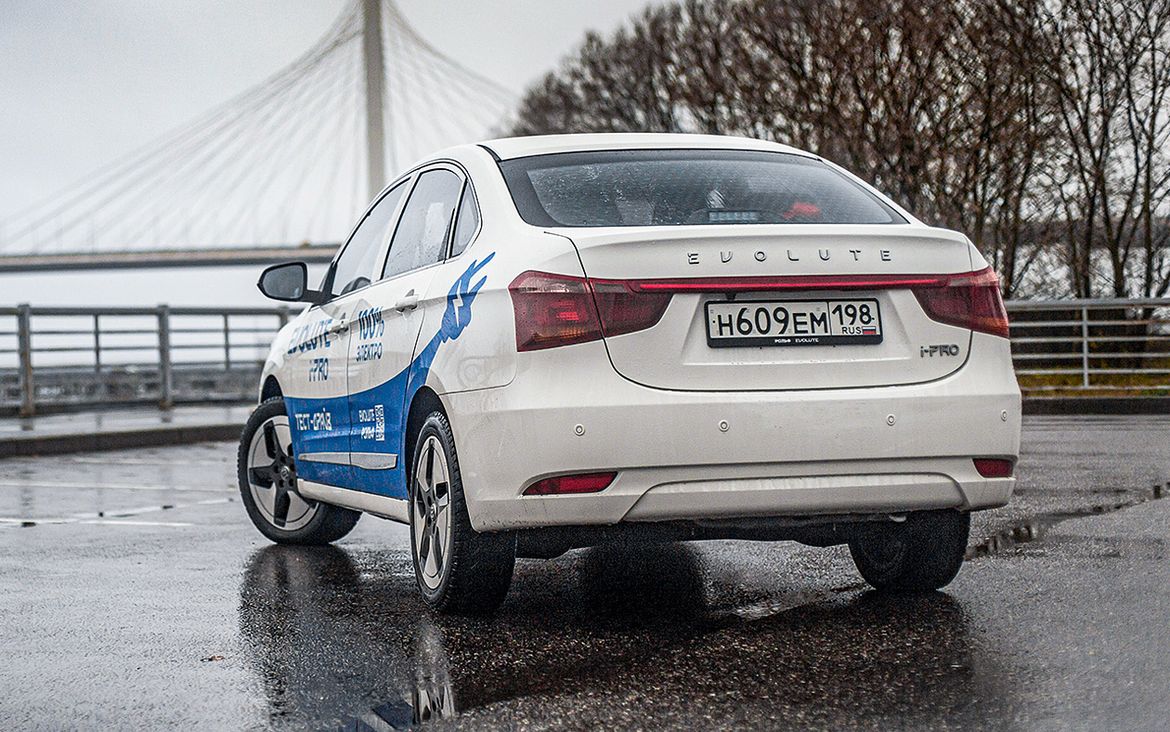 Inside, the Evolute i-Pro makes a favorable impression – for the simple reason that you don’t really expect anything outstanding from it. On the contrary, the decoration of the most inexpensive electric car on the market brings back warm memories of science fiction films from the Soviet childhood, when the vehicles of the future were shown as ordinary cars, only stuffed with colorful lights and flashing screens. The Evolute, in fact, is made the same way: modern digital tablets are simply added to the interior of a car from the 17-year past, and under the hood, instead of a conventional engine, there is an electric motor.
Modernization, I must say, though simple, but sound. Even everywhere hard plastic has a texture, modern decorative inserts are carefully made, and a combination of dark and light shades is skillfully used in the decoration. Together with a digital instrument panel, a large on-board computer screen and a gearbox joystick (like in modern Peugeot), the Evolute does not seem like an alien from the early 2000s. 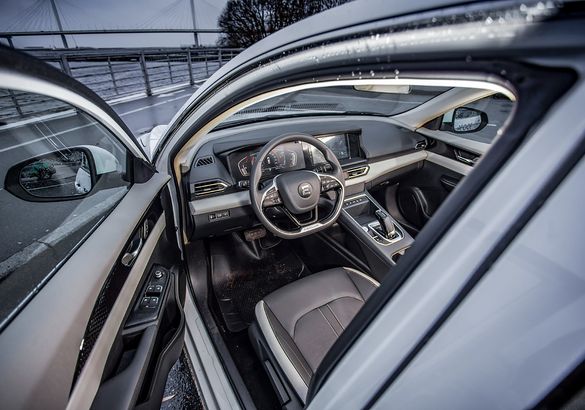 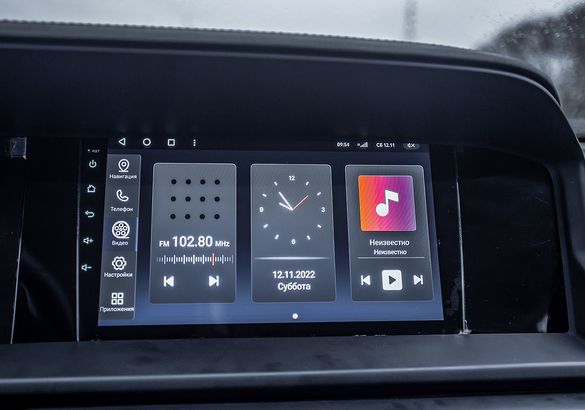 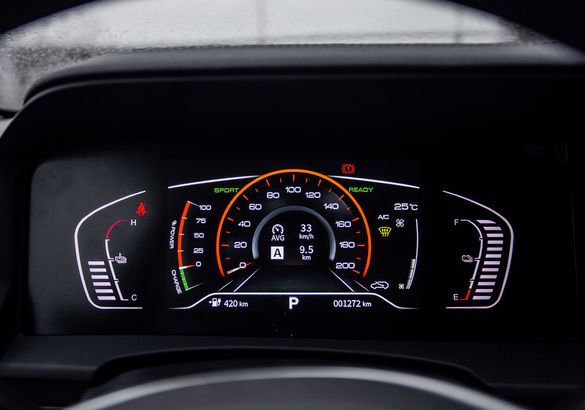 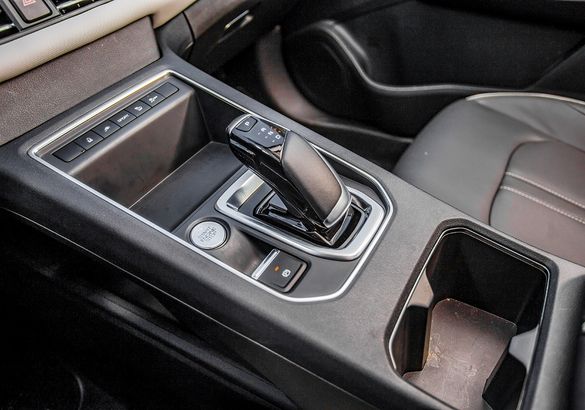 Multimedia complex – large Android tablet with car apps. You can play both with the settings of the machine and with the usual programs. The domestic navigator “CityGid” is installed regularly, and the main drawback in terms of options is the complete absence of a winter package: there is not even heated seats 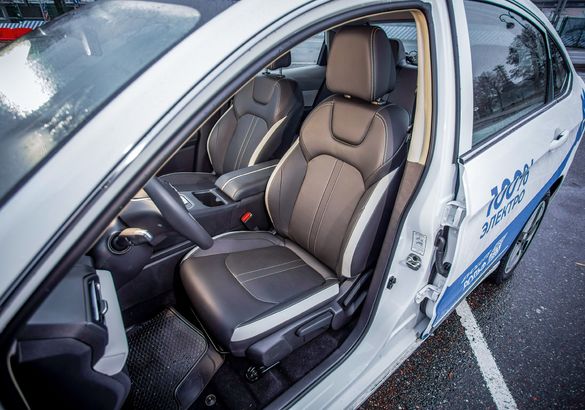 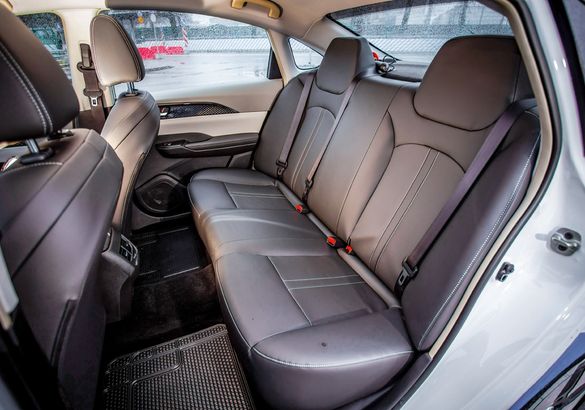 As for landing, it, as once in the Nissan Almera, is a consequence of the specific body of the car. Evolute i-Pro is long and narrow, which makes the legs of the rear passengers expanse, but both in front and behind the riders do not leave the feeling of an elbow. The steering wheel has one adjustment for the angle of inclination, and the beautiful-looking, but soft driver’s seat takes some getting used to. In general, the ergonomics of the driver’s seat is described by the word “normal” adjusted for the class of car, with the exception of one extremely unusual nuance: the climate control is entirely … on the steering wheel. Why remains a mystery.
Rear passengers are not forgotten either. In addition to free space, there are air vents, USB chargers and “bottle bottles” in the doors. The only thing missing is a reclining armrest with cup holders. 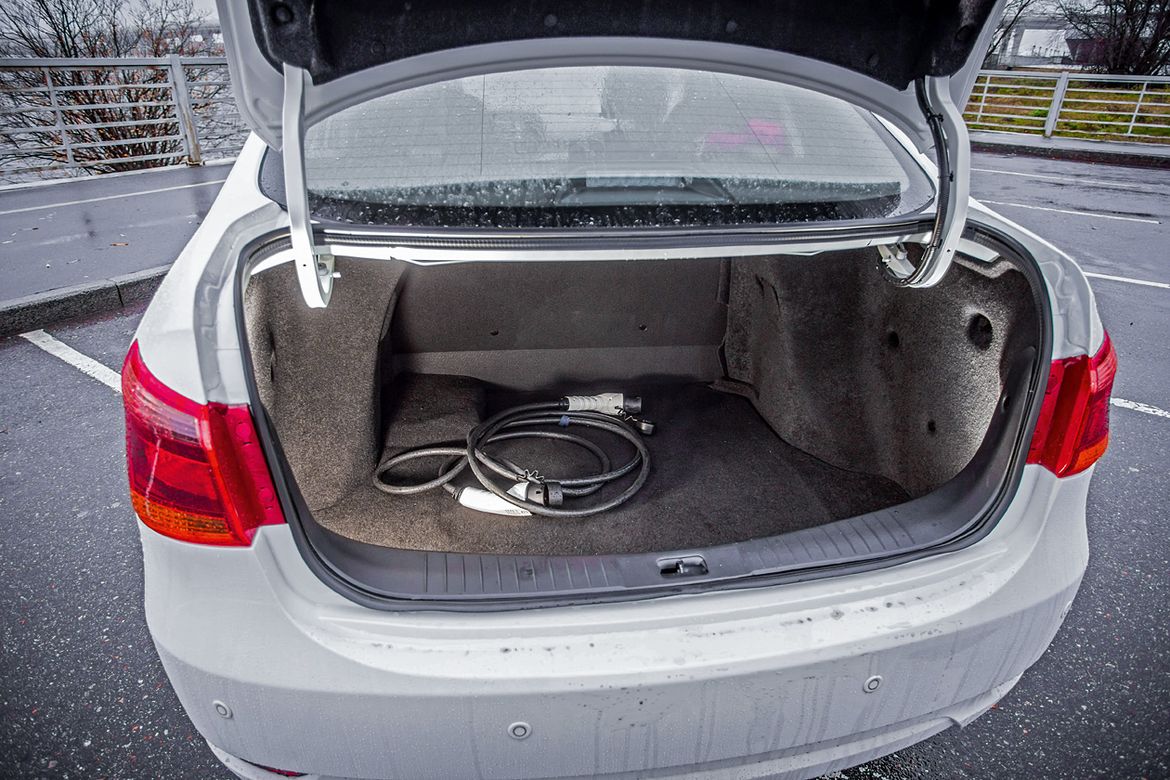 The trunk of the Evolute i-Pro is expectedly large: 502 liters. This one will definitely come to the yard in taxi companies. Here lives the charging cable and the “dock” under the floor. Another nuance is also available: due to the location of the battery, the seat backs no longer fold
The start of an electric car is already habitually indicated only by a flashing instrument panel. The joystick of the box, well known from the Peugeot lineup, wakes up a 150-horsepower electric motor. The power reserve for such a car is exhaustive even on paper, but in reality the electric car is perceived as even more dynamic. There are already concerns about how “car-sharing” scorchers will drive this car.
The peculiarity of the model is that the i-Pro does not have an average driving mode: either sleepy Eco or “driving” Sport. One way or another, for the dynamic characteristics – an unambiguous offset! We boldly put another five “Evolute” for the settings of an impenetrable and quiet suspension, which, by the way, is native to the car, and not from Logan. At some point, I even had to arrange a competition for the speed limit of speed bumps: the electric car swallows potholes so effectively. But the steering did not leave any special emotions – the i-Pro is obedient and stable to the best of its urban capabilities. No more… 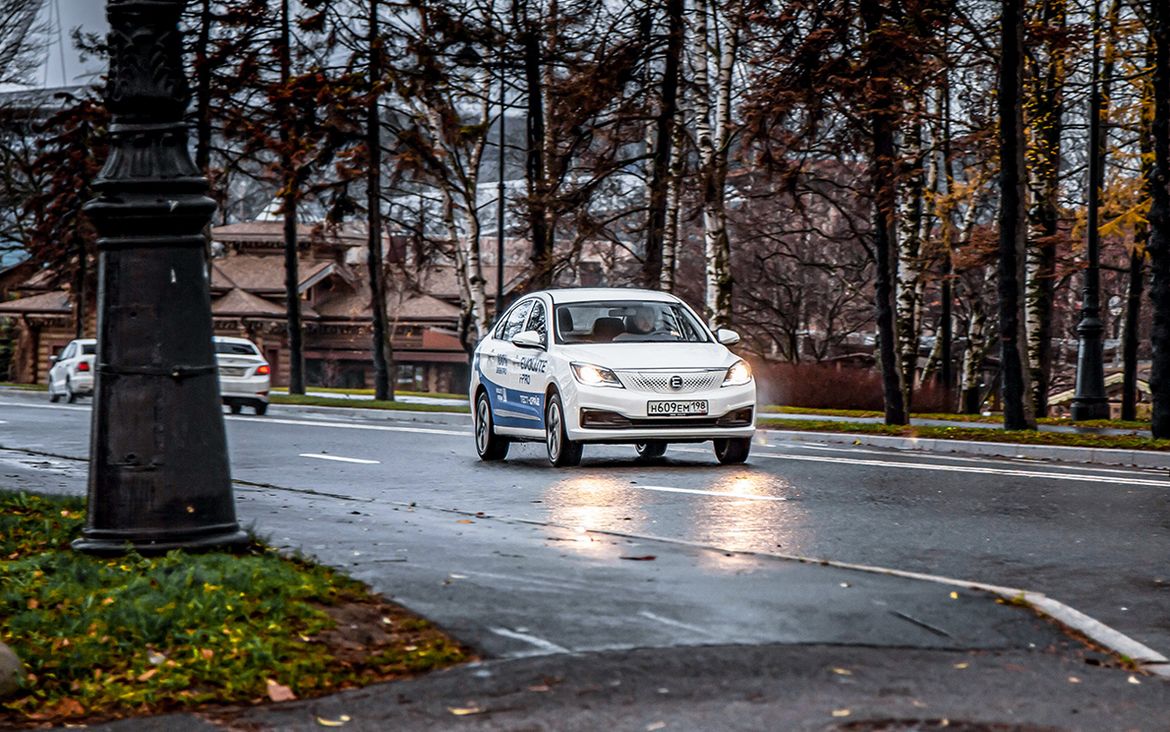 Alas, in Russian reality, an electric car cannot do without an internal combustion engine. A diesel interior heater is available as an option on the Evolute i-Pro. Ordering is strictly required. The regular Chinese stove cannot cope with the Russian cold, intensively consuming the precious battery reserve
The main question is: how long does it take to fully charge an electric car? Having sufficient experience in operating such equipment, we had no illusions about the 53 kWh battery, because even on premium electric trains with twice the capacity, the power reserve turned out to be much less than declared.
Representatives of the brand confidently declare: the power reserve is more than 400 km! Indeed, the i-Pro unfastened from the outlet with a 100% charge showed the rest of 430 km. However, the stove turned on to the full, the radio tape recorder, navigation and backache in the sport mode quickly returned everything to its place. For an incomplete test day, which also included photography of the car, the on-board computer deducted 45 virtual kilometers from our “deposit”, while the odometer showed that we had not physically driven even twenty. Simple arithmetic stubbornly testifies: the onset of winter reduces the real autonomy of the course by almost half. Without additional tricks, such as a diesel heater, the mileage of the Evolute i-Pro is best calculated from the face value in real 200 km. 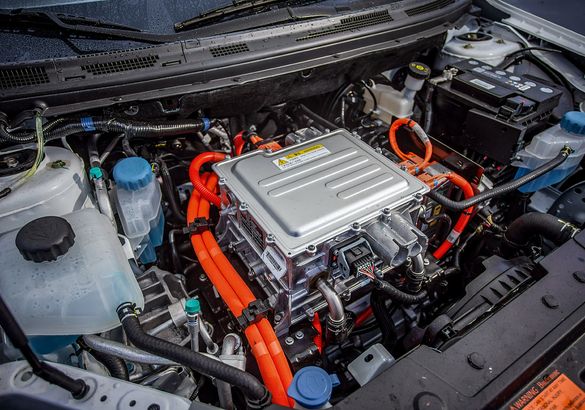 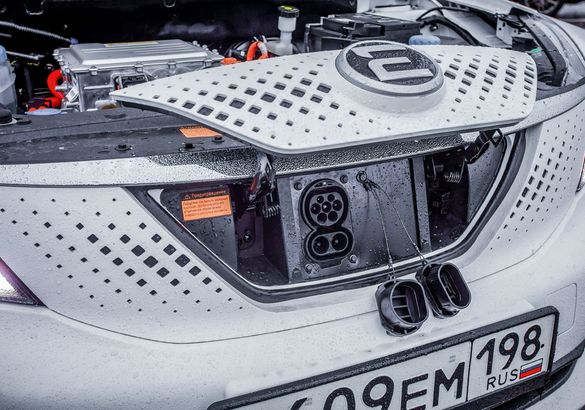 What is the upshot?

Early Evolute dealers are cautiously pleased with the results so far. Taxi companies, car sharing companies, as well as organizations involved in the electric grid infrastructure, take the i-Pro to the test quite actively. There are still a minority of private customers, and those who do buy an electric car only if they fall into the 925,000th state subsidy. With it, the price of the Evolute i-Pro will turn out to be about 2 million rubles: “There is nothing cheaper anyway,” the sales department notes.
In general, the Evolute i-Pro made a positive impression. This is a completely solid, comfortable and smart “electric state employee”, which has every chance of becoming massive if total localization reduces the price by another one and a half to two times. Why so many? Because in the neighboring salon, Evolute i-Pro gasoline “classmates” are still being sold under the name Renault Logan (and in the near future – Lada Vesta) for 1 million rubles, the price difference with which will have to be beaten off by saving on fuel for about 10 years … 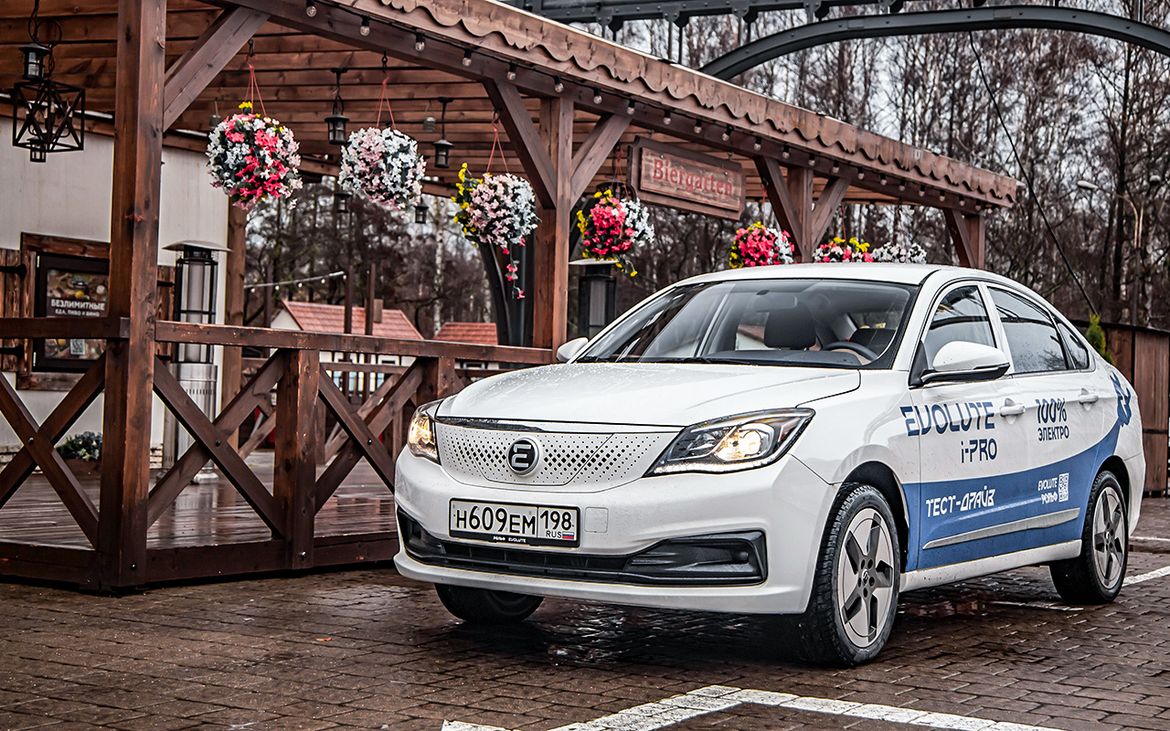 We thank Rolf Autoprime, the official dealer of Evolute in St. Petersburg, for providing an electric car for testing.

Crossover “Moskvich 3” is estimated in rubles