Named the price of the electric car “Moskvich 3e”
31
0
(0 voices, on average: 0 out of 5)
The fight between Russian electric crossovers from Moscow and Lipetsk promises to be tight.

Russian dealers of the Moskvich brand began to receive the first cars – Moskvich 3 crossovers and Moskvich 3e electric cars, TASS reports.
And if the technical characteristics and prices of the gasoline “troika” were known in advance, then there are more surprises with the electric car, the main of which is the starting cost of the model. It was revealed to the agency by a representative of the Petrovsky center of the Belaya Dacha car dealership.
“The first cars have arrived, we can already accept customers, because [люди] are interested, they know that we are dealers. At prices: with an internal combustion engine – 1.97 million rubles, with an electric one – 3.5 million rubles. The recommended retail prices, which are the same for all dealers, are set by the manufacturer,” the source said.
The production of gasoline Moskviches at the former Renault Russia enterprise began at the end of November, while the launch of the production of an electric modification of the crossover was not advertised by representatives of the plant.
By December 9, the enterprise managed to produce 160 gasoline cars (they are assembled using the “screwdriver” method from Chinese car kits). The previously published production plan states that by the end of 2023, Moskvich will assemble 400 gasoline (i.e. 240 more) and 200 electric crossovers.
The information indicated in the OTTS regarding the power of the synchronous electric motor SY Power TZ200XSIEM1 (50 kW / 68 hp) also raises doubts: in the Chinese “source” JAC iEVs4, it produces 110 kW (150 hp) and 340 Nm. From OTTS it follows that the traction battery with a capacity of 55 kWh is supplied by Sinoev Technologies. The passport range of the Moskvich 3e is 410 km.
In the Russian market, the electric Moskvich already has a direct competitor – this is the Lipetsk crossover Evolute i-Joy (from 3,490,000 rubles), that is, a licensed copy of the Chinese electric crossover DFSK Seres. The Moskvich is longer (4410 vs. 4385 mm; but the wheelbase of the Evolute is longer – 2655 vs. 2620 mm), narrower (1800 vs. 1850 mm) and higher (1660 vs. 1650 mm) than the Evolute, besides, the range it has 3 km more than the outdated NEDC cycle (i-Joy has 407 km). 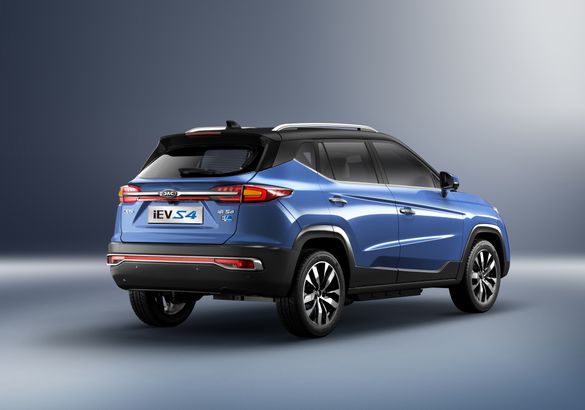 There are no official images of the electric Moskvich yet. It remains to focus on the appearance of JAC iEVs4, which, however, is unlikely to be very different from the Russian counterpart
But the Evolute crossover has a more spacious trunk (535 liters versus 520), but the Moskvich – if the Chinese electric motor is not cut in return – will certainly offer better dynamics.

The localization of both electric crossovers is minimal (almost finished cars come from China, on which only electric motors, bumpers, batteries, suspension and chargers remain to be installed), but the program of state support for demand for electric vehicles will still allow you to count on a 35% discount from the original price (but no more than 925 thousand rubles) when buying a car on credit. In this case, the price of the electric Moskvich (excluding the overpayment of bank interest) will be 2,575,000 rubles.

Updated Geely Coolray will not be localized in Belarus until 2024