Mercedes-Benz S-Class received an AMG version
43
0
(0 voices, on average: 0 out of 5)
There have never been more powerful ICE sedans in the history of the global automotive industry.

600 kilograms. That is how much the new S 63 is heavier than the predecessor of the W222 generation. Mercedes has irrevocably embarked on the path of electrification, not sparing even the AMG line: from now on, not only powerful motors, but also traction batteries are being developed in Affalterbach.

The full name of the novelty is Mercedes-AMG S 63 E-Performance. That is, we have a plug-in hybrid in front of us: a modular electric drive is installed on the rear axle, which, in addition to the traction electric motor, includes a two-stage transmission (“the second” electronics includes approximately 140 km / h) and an electronic self-locking differential. 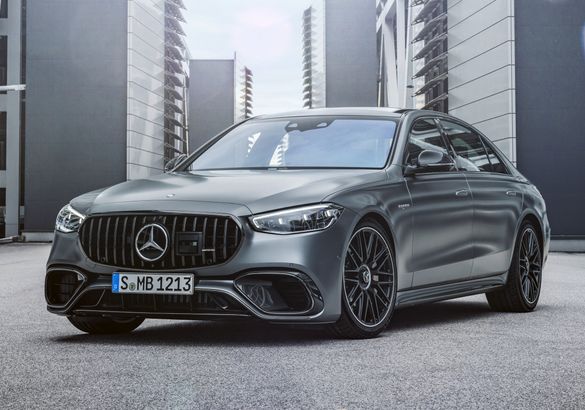 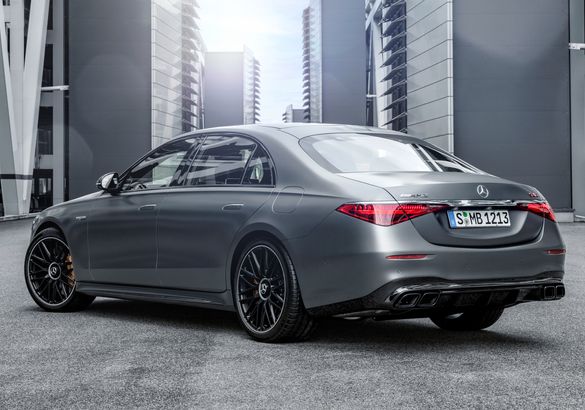 The characteristics of the electric “makeweight” in the S-Class differ from those of other AMG hybrids – C 63 and GT 63 S. The power of the electric motor is 140 kW (190 hp) instead of 150 kW (204 hp), torque – the same 320 Nm. But the useful capacity of the traction battery installed in the rear overhang was increased from 6.1 to 13.1 kWh.
The Germans calculated that to maintain the optimal temperature of the battery (about 45 ° C), 14 liters of refrigerant are used, which circulates through the tubes around all 1200 cells. 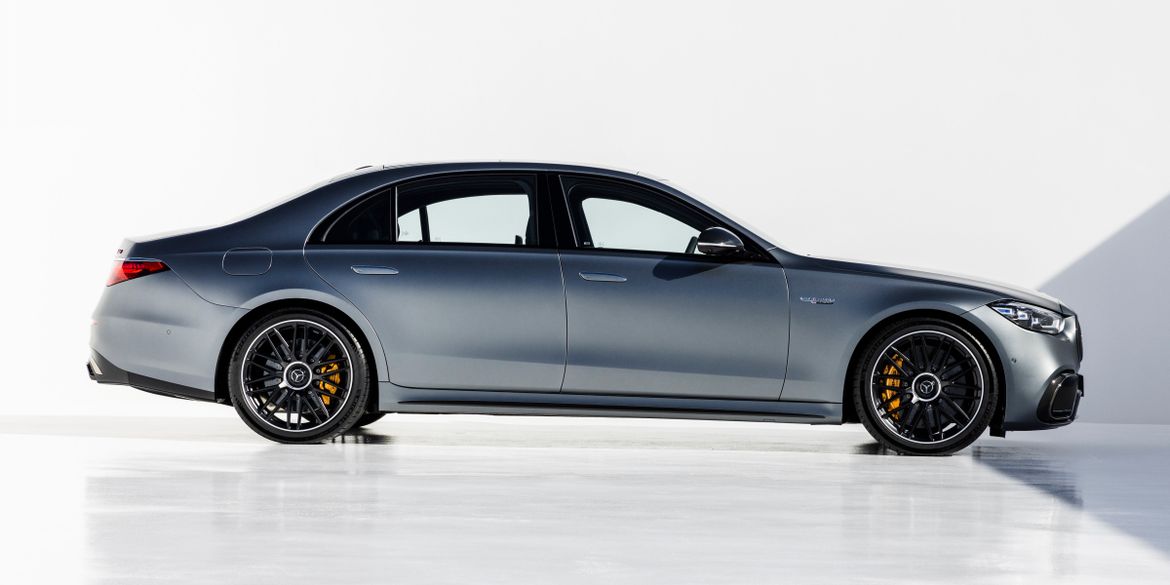 The new S 63 can travel 33 km on electric power alone and reach 140 km/h. At speeds up to 20 km / h, the system synthesizes a special sound (it is also heard in the cabin), which should warn pedestrians of an approaching car. With a set speed, the sound fades smoothly, but it can be turned on forcibly through the settings menu.
“Biturbo-eight” M177 inherited from the “63s” of the previous generation. She develops 612 hp. With. and 900 Nm and works in conjunction with the “automatic” AMG Speedshift MCT-9G and the 4Matic + all-wheel drive system with a multi-plate clutch on the front axle. A 10-kilowatt (14 hp) starter-generator is built into the transmission housing, which uses a start-stop system. 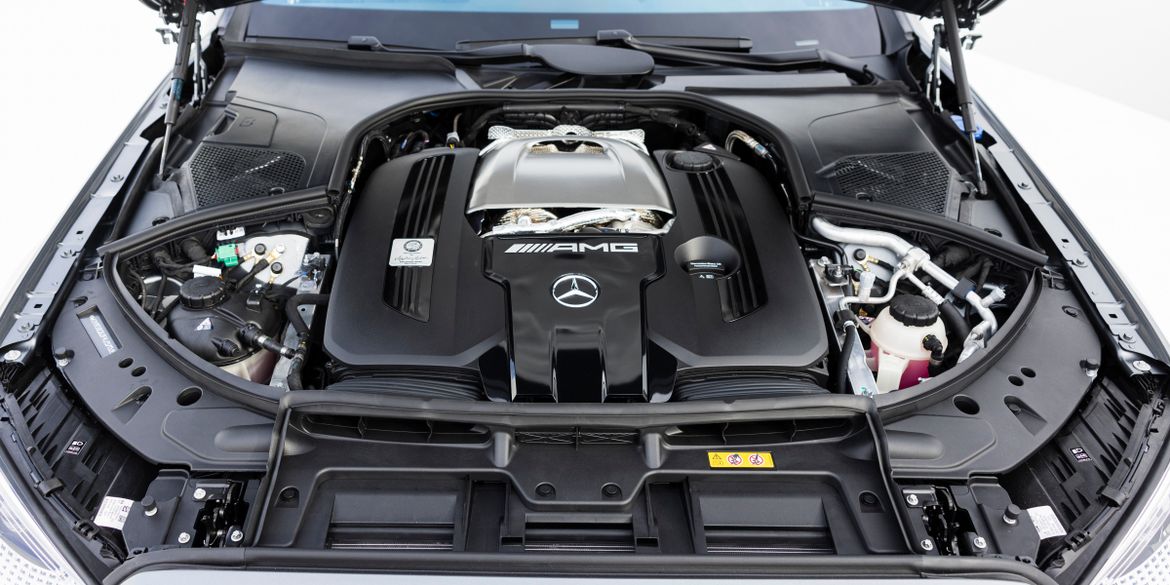 The peak output of the hybrid installation reaches 802 hp. With. and 1430 Nm – before us is the most powerful serial sedan with an internal combustion engine under the hood ever produced. The motor is now mounted on active air mounts, which are designed to dampen unwanted vibrations.
But there is a nuance: power-to-weight ratio. Hybrid personal belongings weighed the car up to 2595 kg (in running order), that is, for one kilogram of mass there is only 0.31 horsepower. This is more than the previous S 63, but not by much. 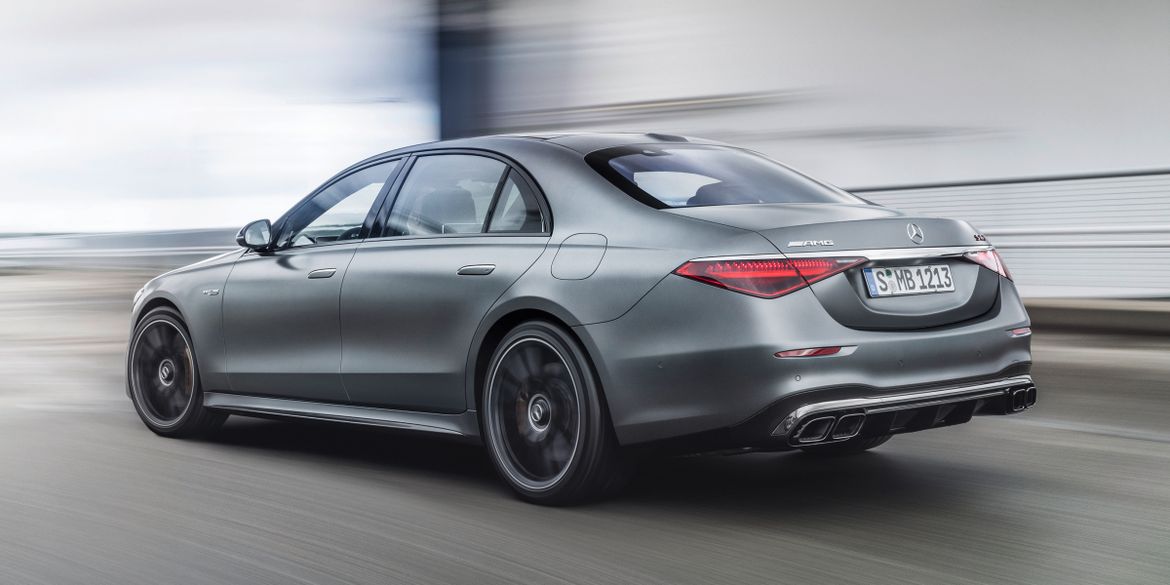 Acceleration to the first “hundred” takes 3.3 seconds – and this is really two tenths less than its predecessor. But the Germans will only agree to move the electronic “collar” with the AMG Driver’s Package option only up to 290 km / h: even the new Audi RS 3 performance can already go faster, not to mention the S 63 W222. In addition, a 140 kW electric motor can only produce 10 s – then its power drops to 70 kW.
But in terms of efficiency, the new “63rd” has no equal: a consumption of 4.4 liters per 100 km in the WLTP cycle is declared. That is, the car has become twice as economical as compared to the previous generation S 63. Electric and Battery Hold modes have appeared in the driving electronics menu, several levels of braking regeneration are also available (up to 90 kW).
For the sake of better handling, the body was strengthened. A cruciform strut appeared in the design of the front suspension, the rear part of the body was strengthened by diagonal struts and a carbon-fiber casing of the traction battery. The boot capacity of the new S 63 is therefore only 305 liters (vs. 540 liters for the base V223): even less than that of the AMG GT Coupé. 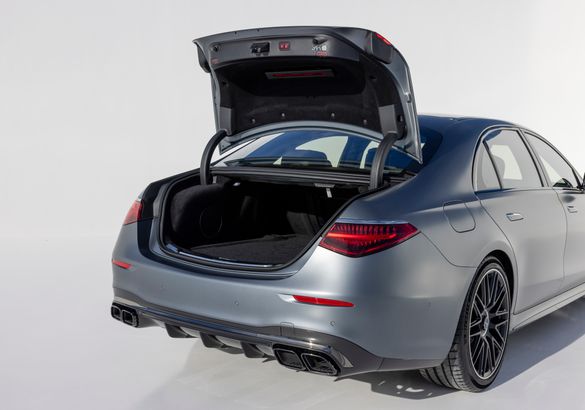 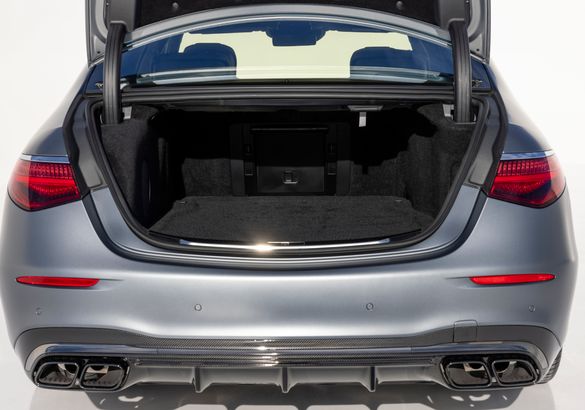 Adaptive air suspension with an active stabilization system and a steering rear axle are standard, but the actuators can only turn the rear wheels at an angle of up to 2.5 degrees (versus a minimum of 4.5 degrees for the base model), which is why the turning radius of the new S 63 is 13.1 m
The 2.6-ton sedan will be supported by larger brakes than before: six-piston with 400 mm discs at the front and single-piston with 380 mm discs at the rear. For a surcharge, it will be possible to order a more durable carbon-ceramic with red calipers. 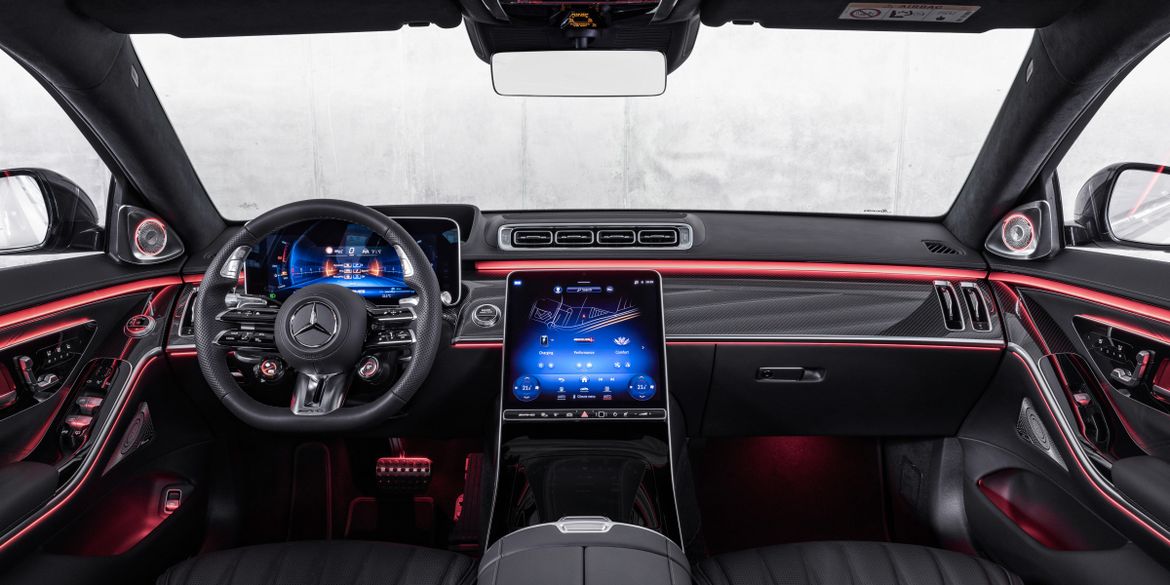 The S 63 is equipped with a full range of electronic assistants – except for the third level autopilot (currently available only in Germany), which is already installed in regular S-Class and EQS electric liftbacks. This is a paid option, which will become available for the AMG version later (apparently, the Germans are still looking for places for lidars and cameras in the new grille and bumpers). 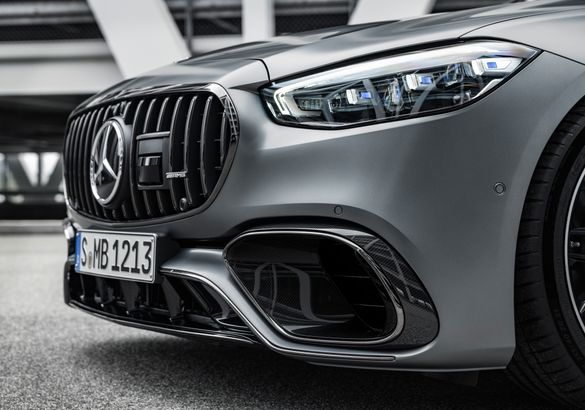 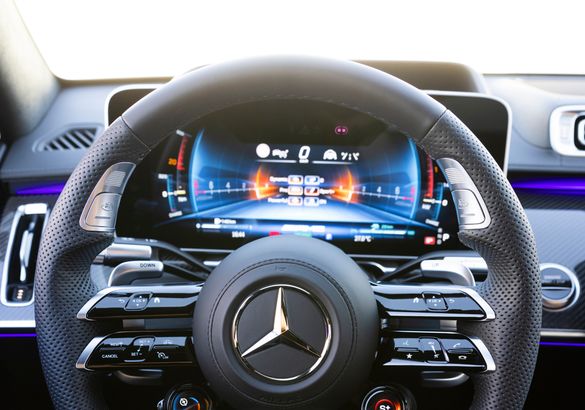 Cars with autopilot can be distinguished by a large lidar in the radiator grille and silver inserts on the steering wheel with buttons in the grip area
A large star in the center of the grille with vertical bars on the S-class looks unusual: before, even the AMG versions had a “sight” of a three-beam star on the hood and classic horizontal slats. Other exterior decor is standard: aggressive bumpers with large air intakes, four rhombus exhaust pipes and wheels with a diameter of 20 or 21 inches. And, of course, nameplates: on the front fenders and the trunk lid. 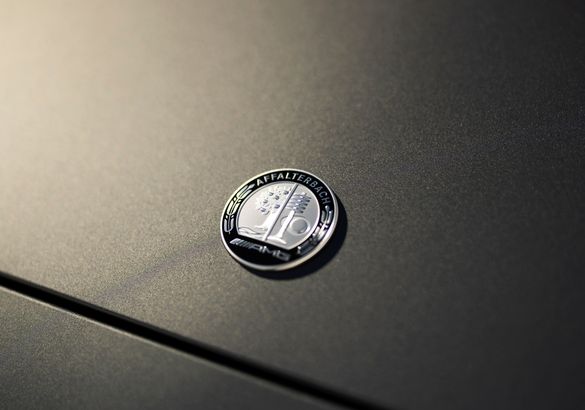 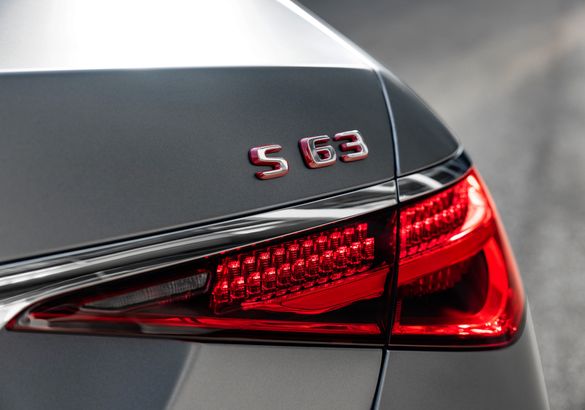 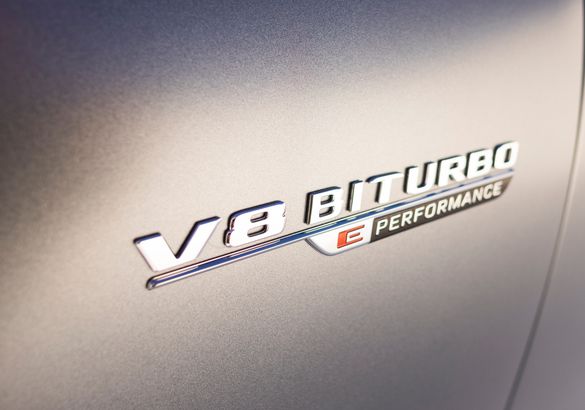 In place of the three-pointed star, there is now the coat of arms of the sports division, and the nameplates have a red outline – this is a hallmark of all hybrids from AMG
The S 63 is available exclusively in the long wheelbase version (axle distance 3216 mm). The salon is four-seater: the Germans did not want to give up luxurious individual chairs even for the sake of sports, although for the base V223 you can also choose a regular sofa. The Burmester audio system with Dolby Atmos surround sound technology is also standard on the new super sedan. 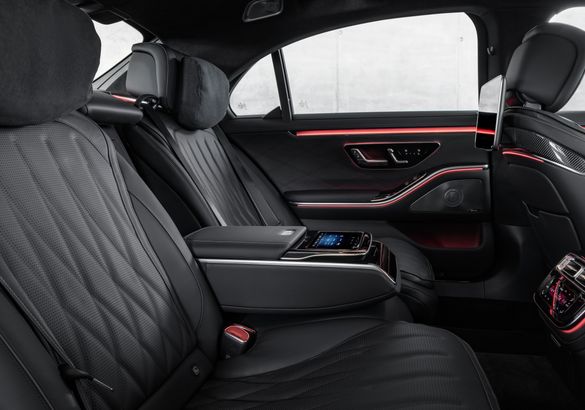 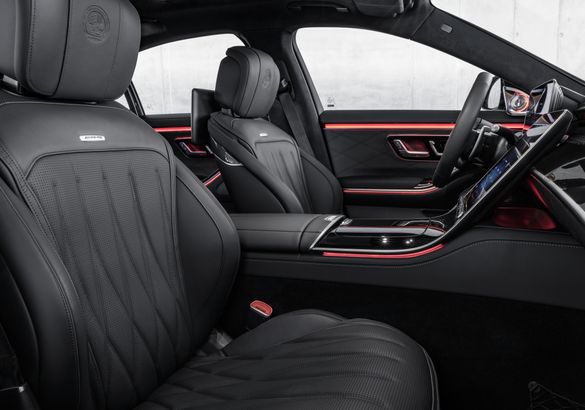 Switches for transmission and recuperation modes appeared on the steering wheel. The interior is upholstered in genuine leather, carbon decorative inserts are available as an option. A head-up display will offer the driver two new modes – Race and Supersport.
Sales of the new Mercedes-AMG S 63 E-Performance will begin in 2023. The initial price has not yet been announced, but it is unlikely that it will be lower than 200 thousand euros. 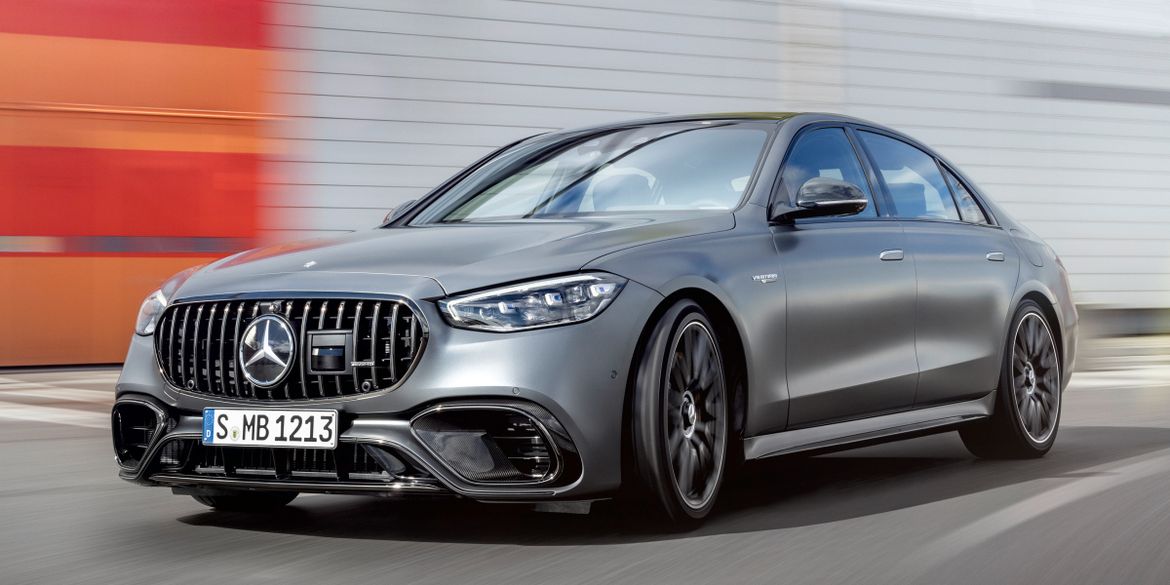 Geely Coolray became available in Russia in a new configuration