Hybrid Mercedes-AMG C 63 turned out to be a hundredweight heavier than the S-class
54
0
(0 voices, on average: 0 out of 5)
The premiere of the sedan and station wagon Mercedes-AMG C 63 E-Performance generation W206. Instead of a V8, it is now the most powerful “turbo-four” in the history of the automotive industry, and an electric motor in the back. In acceleration to “hundreds”, such a Mercedes will still outperform the BMW M3, but at what cost?

Outwardly, the new “63s” can be distinguished by aggressive bumpers with large front air intakes and diamond-shaped exhaust pipes, as well as ventilation slots – in the hood and front fenders – and a larger wing. The distance between the axles has been increased by 10 mm, and the overall length of the body has increased immediately by 83 mm (the front overhang of the C 63 is 50 mm longer than that of the base model). The front track has become wider by 76 mm.
The Germans introduced the E-Performance hybrid system in April last year. Its peculiarity is that the electrical module mounted on the rear axle (the traction motor, two-stage transmission and cross-axle differential are combined in the housing) is also connected to the front wheels by means of a 4Matic + all-wheel drive driveline. 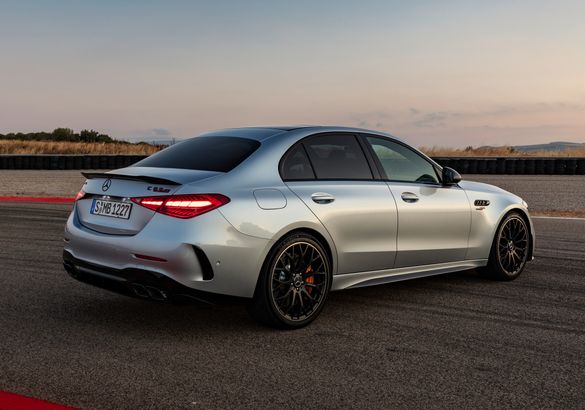 The system made its debut on the Mercedes-AMG GT 63 S E-Performance liftback, but if there is a 4.0-liter twin-turbocharged V8 under the hood, then the fastest C-Class got a 2.0-liter M139l engine from the younger AMG. Above the rear axle is also an 89 kg lithium-ion battery with a capacity of 6.1 kWh, which operates at 400 volts. The transmission of the electric motor shifts to second gear at a speed of 140 km / h.
The second letter in the index indicates the longitudinal arrangement of the engine. Like the SL 43 roadster, a small electric motor is installed on the turbocharger shaft (between the turbine and compressor wheels), which is designed to get rid of the turbo lag during a short-term release of gas, but the turbine itself has been replaced with a larger one. 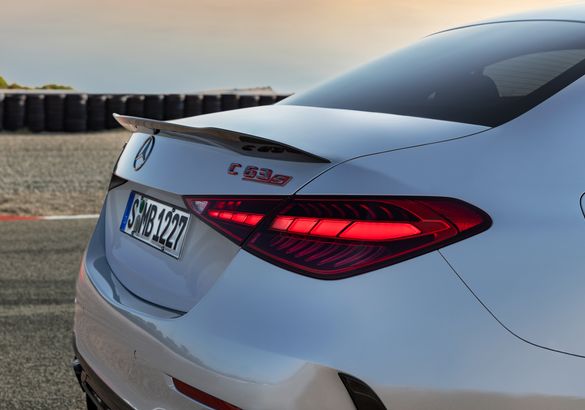 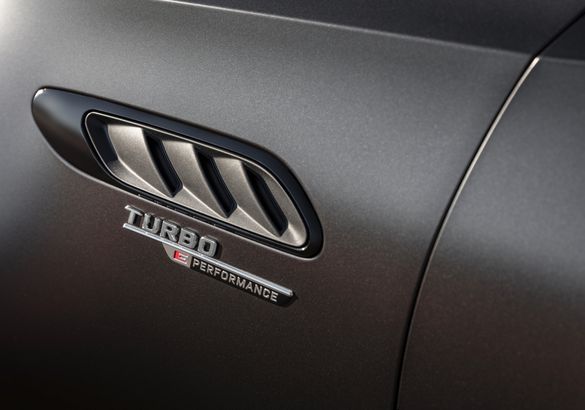 If until now, in the most powerful version, the M139 engine developed 421 hp. With. and 500 Nm, now the record for output among serial “fours” has been updated: on the C 63 it already produces 476 hp. With. and 545 Nm. A starter-alternator is also integrated into the 400-volt system. The 9-speed planetary automatic AMG Speedshift MCT 9G with a wet clutch instead of a torque converter appeared on the charged C Class four years ago. 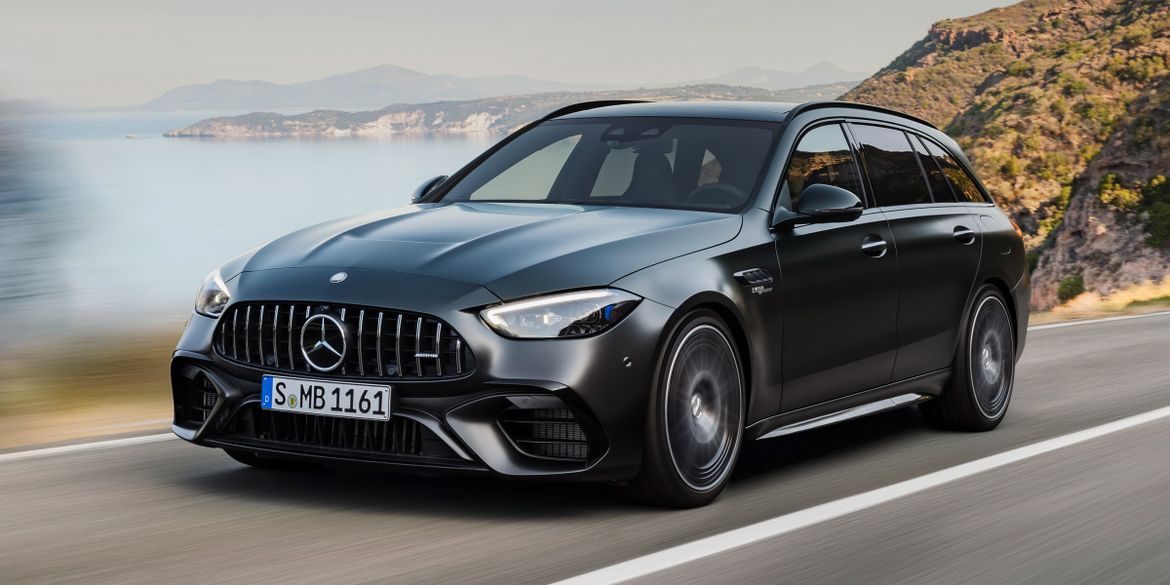 The rear electrical module of the C 63 is the same as that of the more powerful liftback. Its peak output available within 10 seconds is 150 kW (204 hp) and 320 Nm. Thus, during accelerations, peak output can reach 680 hp. With. and 1020 Nm – that is, with the change of generation, the C 63 immediately became 170 forces more powerful in comparison with the previous C 63 S with a V8 biturbo engine. Now it is officially the most powerful production sedan in the history of the brand, because the 4.0-liter V8 in the current generation Mercedes-AMG E 63 S develops only 612 hp. With. and 850 Nm.
However, the dynamic performance is not so impressive: 3.4 seconds to “hundreds” and 280 km / h of maximum speed with the AMG Driver’s Package option (270 km / h for the station wagon). 510-horsepower C-Class without electric “makeweight” can go 10 km / h faster. The point here is not only in a two-fold reduction in the working volume of the engine, but also in a significantly increased mass. The new C 63 sedan weighs 2,111 kg in curb condition, while the station wagon weighs 2,145 kg. For comparison, the all-wheel drive wagon BMW M3 Competition weighs 1865 kg, and the W223 generation Mercedes-Benz S 450 that we tested weighs only 2015 kg! 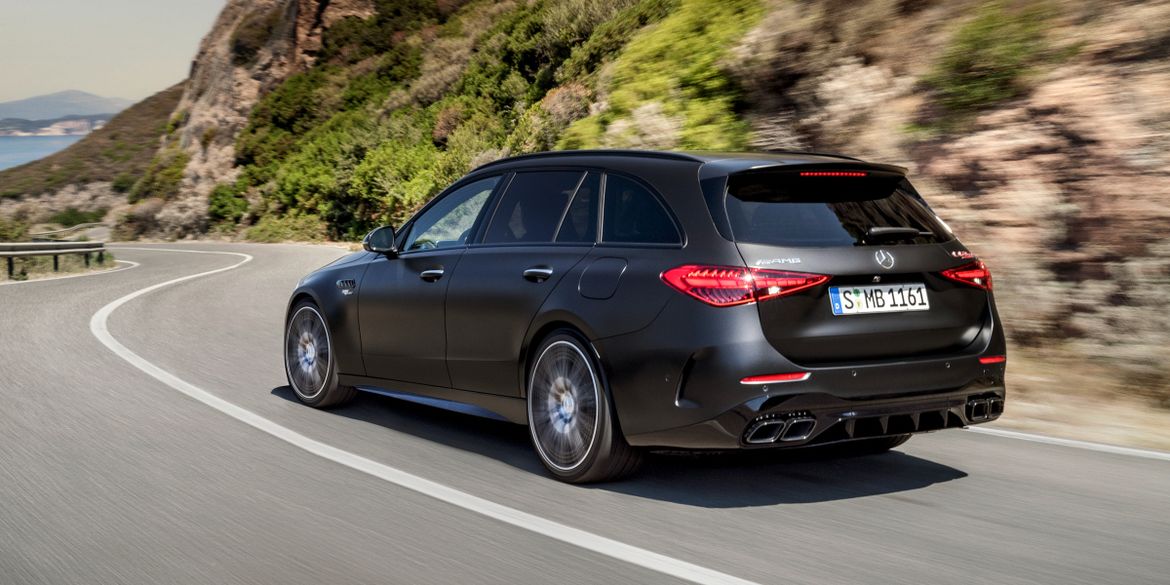 But the transition to a hybrid installation will allow owners of hybrid AMGs to save on gasoline. The declared fuel consumption of the new generation C 63 sedans and station wagons is 6.9 l / 100 km, that is, for every “hundred” kilometers in the combined cycle, the new hybrids need 1.5 liters of the “98th” less than the previous C 63 S.
The base rims are 19 inches in diameter, with R20 wheels available for an extra charge. Like the “warmed up” C 43 models, the novelty is standardly equipped with a rear axle steering at an angle of up to 2.5 degrees and an AMG Ride Control adaptive suspension. The options list also includes carbon-ceramic brakes. 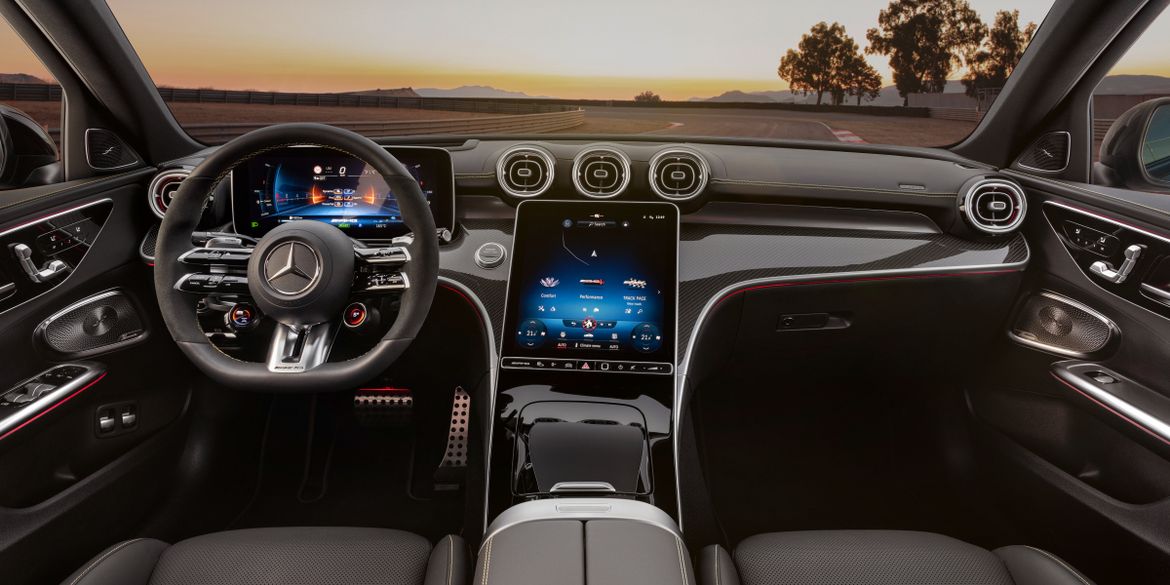 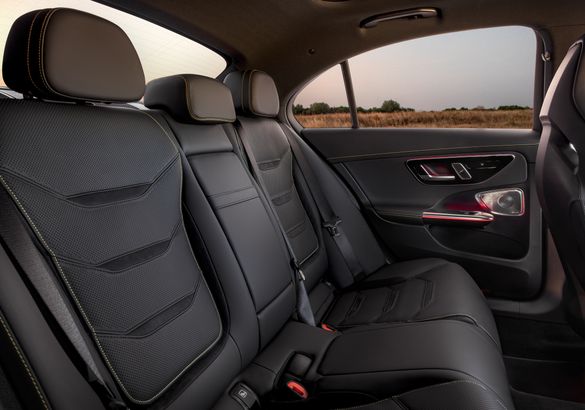 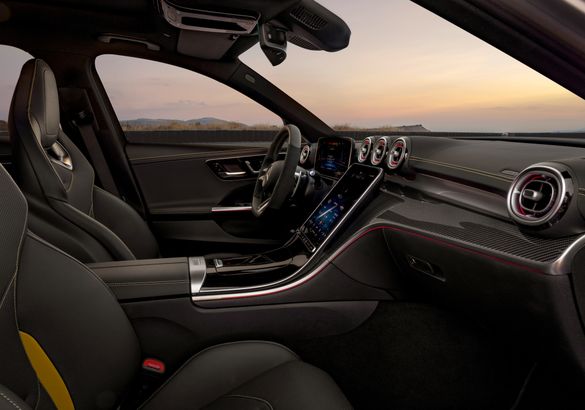 The six previous driving modes (Slippery, Comfort, Sport, Sport+, Race Individual) have been updated with Electric and Battery Hold presets. In all-electric mode, the C 63 E-Performance can hit 125 km/h, but the range is short: only 13 km. When driving on electric power at speeds up to 20 km/h (or up to 19 mph in the US), a special exterior speaker simulates the sound of an engine for pedestrians, while speakers on the A-pillars transmit fake noise into the cabin. 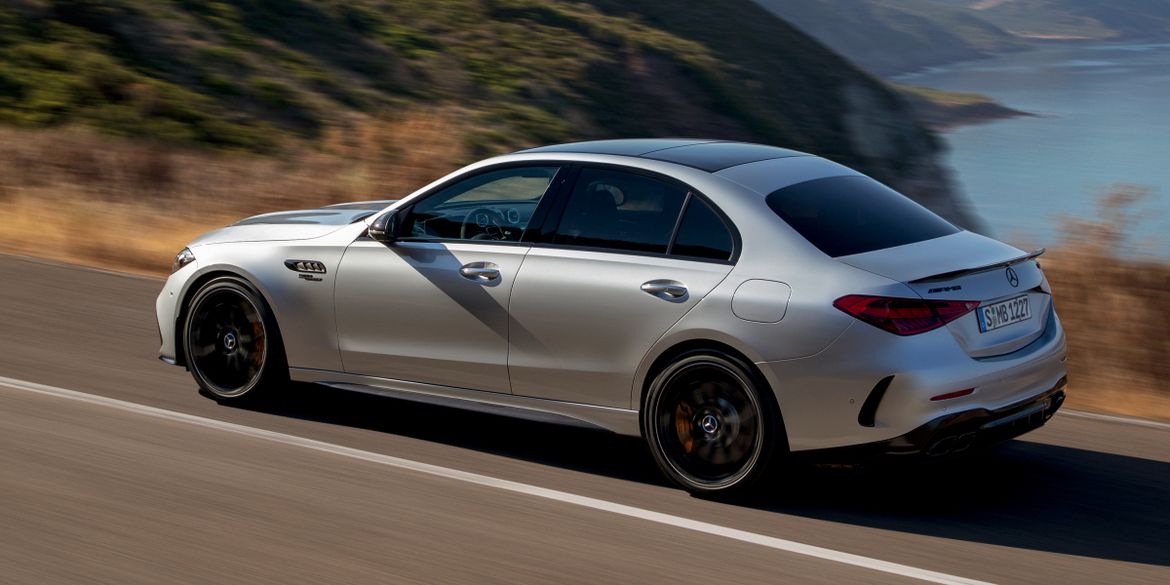 Battery Hold mode is designed to conserve battery power. To recharge the battery, there are four recovery modes, the last of which allows you to ride “in one pedal” and can return up to 100 kW of electricity. You can switch driving modes on the touch screen of the MBUX multimedia system. The selected mode is also shown on the optional head-up display. Another familiar option for fast Mercedes is the front bucket seats.
The company will soon name prices for the new C 63, and by the end of the year the first 680-horsepower hybrids should arrive at the official dealers of the brand. 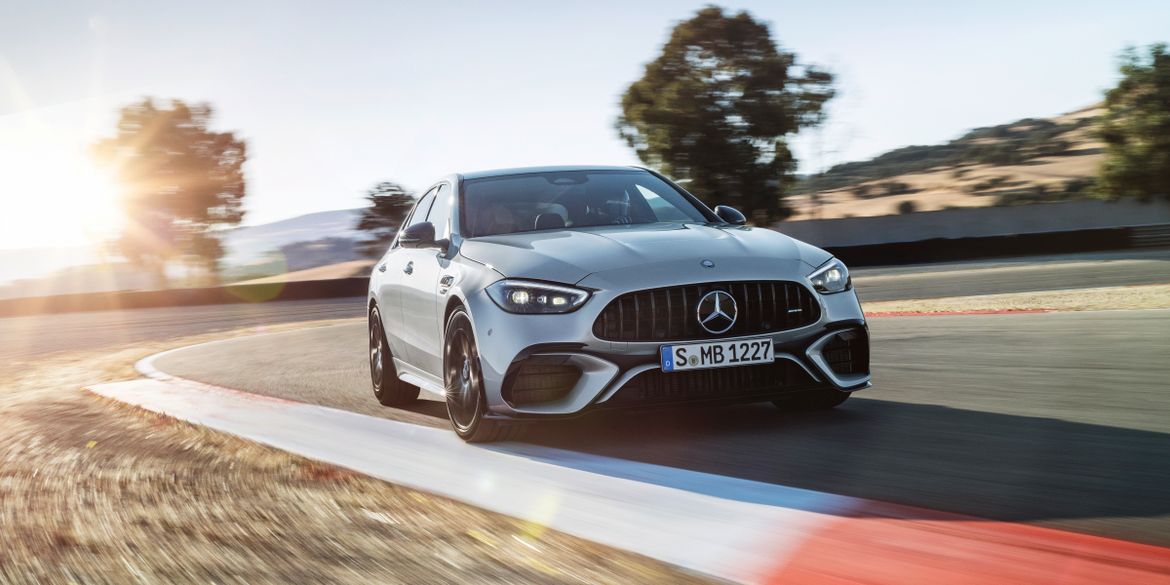