Honda unveils next-generation Accord sedan
21
0
(0 voices, on average: 0 out of 5)
The eleventh generation of the famous sedan is full of contradictions: the body has become more elegant – but the overhangs have increased. The hybrid version is declared as more driver’s – but the power has dropped! Accord’s progress is undeniable in only two things – comfort and safety technologies.

There are not so many differences from the previous generation sedan in the new Accord: wheelbase (2830 mm), body frame (width – 1862 mm, height – 1450 mm) and power units – a petrol “turbo four” 1.5 and a hybrid installation based on 2, 0-liter “aspirated” – survived the generation change almost unchanged. Even the volume of the trunk has not changed: 473 liters.
In the patent photos, the sedan scared with disproportionate overhangs, and they really became larger – the overall length increased from 4900 to 4971 mm.
With base 17-inch wheels, the Accord will certainly look fancy, but the optional R19 wheels (pictured) complete the look.
Body panels, of course, are designed from scratch and are made in the spirit of all new Hondas. The main features of the corporate style are the horizontal hood, combined with a large hexagonal radiator grille of the LED headlight housing and the overall conciseness of the lines.

It’s not easy to immediately distinguish the interior of the new Accord from the interior of a Civic or CR-V: the front panel with a 10.2-inch digital instrument panel and a basic 7-inch multimedia system screen in modern Honda differs only in nuances. However, Accord hybrids have a 12.3-inch touchscreen with wireless Android Auto and Apple CarPlay: Honda has never put such large screens in its cars (even in the new Pilot) before. The top version of the Touring additionally provides wireless smartphone charging and Google services. 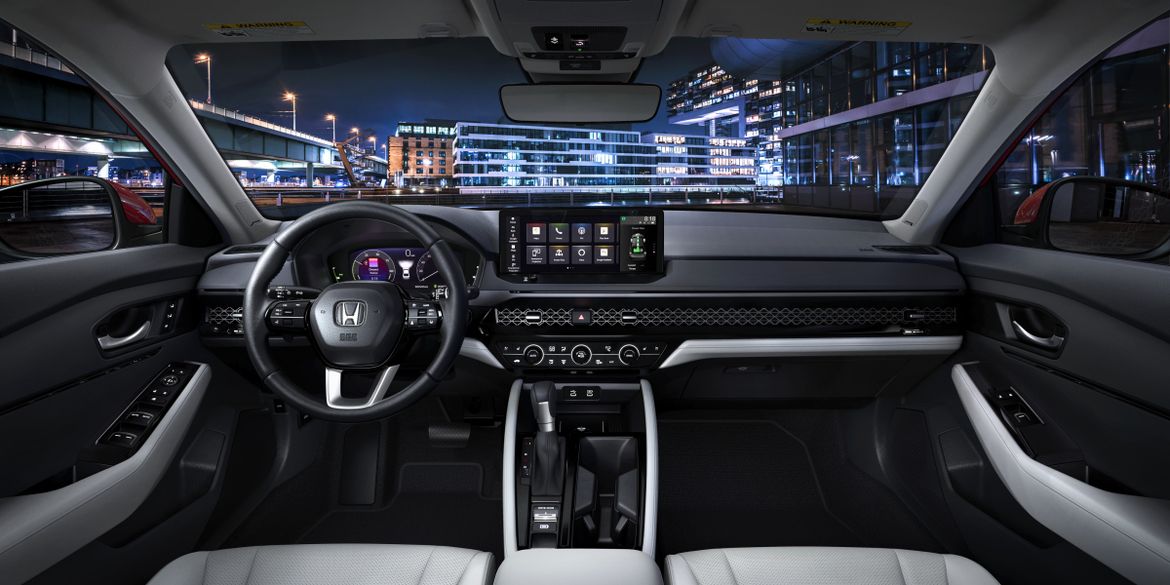 With the change of generation, the car received two additional side airbags for second-row passengers, and the total number of airbags increased to ten. Debuted on the eleventh Honda Civic, the front airbag configuration that reduces the risk of brain damage in a frontal impact (a donut for the driver and a three-section airbag for the front passenger) is now implemented on the larger sedan. The Accord comes standard with the latest generation of Honda Sensing electronic assistants and more ergonomic front seats, which are designed to reduce the load on the spine on long trips.

The hybrid will be available in four trim levels (Sport, EX-L, Sport-L and Touring), while the petrol version will be available in only two (LX and EX), both exclusively fitted with 17-inch 225/50 wheels and trim. interior with black fabric (EX equipment has heated front seats, a panoramic roof and a dual-zone “climate”). In expensive hybrid versions, a “leather” interior with ventilated front seats and heated rear seats is available.
The base turbo engine of the Accord received a modified direct injection system and a reinforced crankshaft, but this did not affect the return: the same 195 hp. With. and 260 Nm. The engine is proposed in conjunction with a V-belt variator and front-wheel drive. 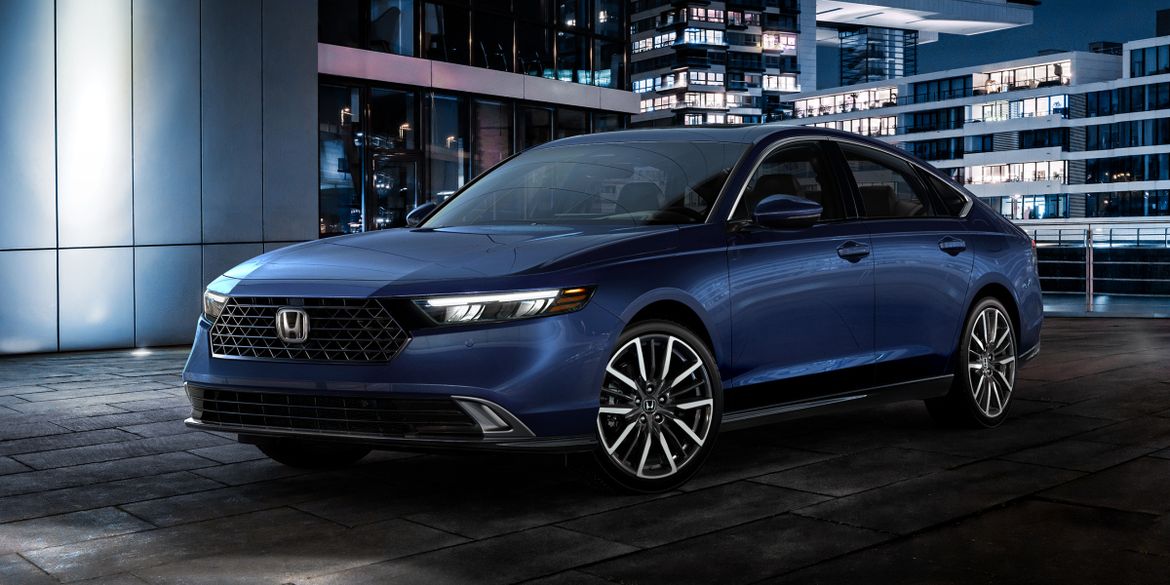 The hybrid power plant, as expected, went to the sedan from the CR-V crossover: the gasoline engine has direct injection instead of distributed. The power has become lower (207 hp instead of 215), and the torque is higher (335 Nm instead of 315). The Japanese do not report the capacity of the lithium-ion battery, but it can be assumed that it is the same 1.1 kWh as that of the hybrid CR-V.
The Japanese hope that the hybrid version will account for at least half of the model’s sales. It is stated that the new Accord Hybrid reacts more sharply to the accelerator pedal and gives more emotions from driving by simulating gear changes (although instead of a box there is a reduction gear). The 2.0-liter turbo engine for the eleventh Accord will not be offered. 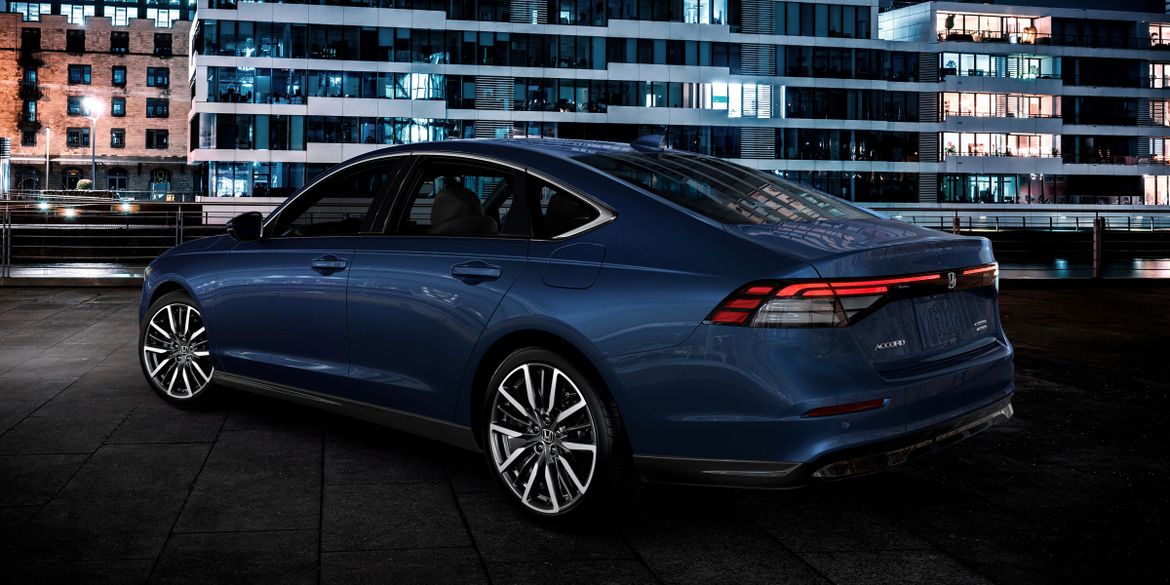 Sales of the new Honda Accord in the US will begin this winter. The model will continue to be produced at the company’s plant in Ohio. In 2023, the eleventh generation of the sedan will also appear in China: the assembly of the Accords for the local market is carried out by the joint ventures of GAC-Honda (Guangzhou) and Dongfeng Honda (Wuhan).

The previous generation of the sedan did not win much love from the Americans: if the ninth Accord was sold in circulation of 320-380 thousand cars annually, then by 2020 sales fell to the mark of 200 thousand cars. At the end of the conveyor life, the tenth generation model costs 26.5 thousand dollars without options, and American dealers ask for 31.1 thousand dollars for a hybrid car in the Sport package

The new BMW iX1 got on the conveyor